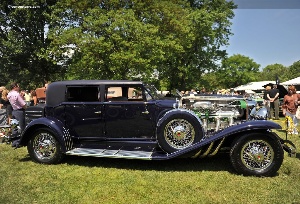 Best of Show
This years Best of Show honors went to the most deserving vehicle on the field, a 1933 Duesenberg Model SJ Beverly Sedan with coachwork by Murphy. Seen by many as the most beautiful closed Duesenberg design, the Beverly sedan by the Walter M. Murphy Co. of Pasadena is truly an elegant blend of closed coachwork with the massive Duesenberg chassis Armchair seating, rear seat instrumentation, and unique art deco window designs are just a few of the features that grace this car. Just over 400 Duesenberg Model Js and SJs were built between 1928 and 1937.

This 1933 Duesenberg (SJ-512) is one of only 45 Duesenbergs produced with a factory-installed supercharger. This rare model SJ was first ordered by Powell Crosley, who resided in Cincinnati, Ohio, and made his fortune in radio and electronics during the 1920s. He took delivery July 1, 1933. Of the 45 Model SJs produced, only five of these were sold with enclosed bodies. This model sports a unique, highly placed and radically embossed belt line which drops down after the windshield. It is further highlighted by a small but dramatic triangular window that is located between the windshield and A-pillar. Unlike some, the model SJ-512 has always retained its original engine and its body has not been replaced or altered.
Galleries
American Classic Closed

Vehicles By The Water