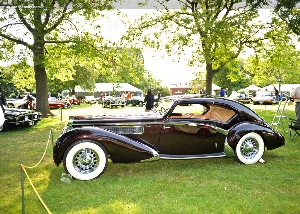 Best of Show
This years Best of Show honors went to the most deserving vehicle on the field, a Delage D8-120 with coachwork by Letourner et Marchand. In the late 1930s Letourneur et Marchard of Paris built a series of aerodynamic 'coaches profiles' that pushed the typically French pillarless style to its aesthetic limits. The Delage Company was unable to weather the economic storm of the early 1930s, and its demise in 1935 led to the amalgamation of Delahaye and Delage in 1936. The new company brought out the first D8-120 wîth two cylinders added to the Delahaye 135MS straight-6 engine, bringing the capacity to 4.3-liters. Most of the D8-120s were built on a longer chassis and were very stylish for the period and were owned by the rich and glamorous.
Galleries
Aston Martin, Rolls Royce, and Bentley