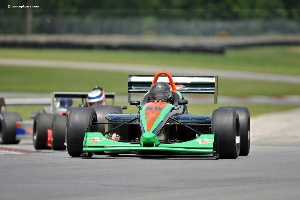 Mid-Ohio Sports Car Course, Ohio - The SVRA Vintage Grand Prix of Mid-Ohio event was held on this technically challenging 2.4-mile, 14-turn, narrow ribbon of asphalt that follows the naturally rolling terrain of the countryside. It is a must visit for any race fan who have never been here to witness the cars negotiate the variety of high speed and tight turns. Drivers have to deal with the major elevation changes not only on the straight sections, like Thunder Valley, but in the middle of corners such as the one referred to as 'Madness.' With a park-like setting, spectators can view many corners of the track from the amphitheater-like grassy viewing mounds or grandstands around the circuit and from spectator fencing up close to the action. It is easy access to the spectator areas to watch these beautifully restored historic machines negotiate the same corners, like 'The Carousel' or Keyhole', as they may have in their own heydays. Speaking of which, over 220 cars were here to do battle among 12 group, enduro and feature races.

Friday started cool and wet. Weather suitable for rain tires lasted all day with the occasional let up giving hope of a drying track to the competitors only to rain again just as the a dry line formed on the. Practice saw a few brave souls venture out onto the slippery track made worse after a car dumped oil. Not many participated in qualifying because of the second session scheduled for Saturday was suppose to warm and dry, predicated by the weatherman. With a few off course excursions and spins they all survived the day in hopes of better conditions tomorrow and that should bring the viewing crowd count higher.

Saturday started out cloudy and cool, and spectators dotted the hillsides, as the chance of rain was slim even with the clouds passing all day. The track activities started early as every one prepared to log the track time they missed Friday with full groups participating in Practice and the Qualifying Races. No real issues occurred until the Group 7 had a major track oil-down. So with this lengthy delay before the Group 6 / 10 combinations and the Classic Enduro scheduled for 10:55 officials pushed the Group 12 and 7B / 11 combinations to after lunch. A great move by the officials because it gave everyone plenty of track time to set their times for later that afternoon leading to competitive events.

The Classic Enduro saw 42 cars take the green leading to many close battles throughout the field. There were few retirements. Overall winners and first in Group 6GTU were, Chip Vance driving a 1971 Porsche 914/6 completing 32 laps with an average speed of 76.597 MPH. Just 5.165 seconds back was Fritz Seidel in a 1967 Porsche 911S leading the Group 8A/P. Third place and second in 8A/P was the last car on the lead lap driven by Todd Treffert in a 1973 Porsche 911RS. A 1972 Porsche 911 driven by Nort Northam and Ron Zitza took third in 8A/P a lap down. A driver from back in the IMSA days, Pete Halsmer, started the Ford Lotus Cortina then handed it over to owner Don Heth who eventually finished 28th completing 28 laps. Pete started out his racing a Ford Cortina that lead to his successful racing career and when this opportunity arose to drive a similar car to the one he loved, he jumped on it.

Sunday looked like rain and then cleared out. Sunshine and warm temperatures arrived as the cars shows packed the infield and the racing did the same for the viewing mounts with spectators for the Historic Enduro. Jack Baldwin shared the wheel of the Porsche Napleton Racing Porsche Cayman S with co-driver Bob Schneider for second place in class. Then the car was DQ'd for not making the required two pit stops. George Robinson had a guest co-driver in none other than Guy Cosmo for the 2007 Lola Judd and turned the tables on Andy Wallace and Doug Smith from Saturday but this time the margin of victory was over a minute. George Robinson even set the fastest race lap with a time of 1:17.759 at 111.113 mph. Again, in third was Travis Engen drove the silver 2005 Audi R8 LMP.

Doc Bundy loves to drive his1964 Lotus 23B, for the balance and the ability to oversteer or understeer per his input. The result was a win in the Group 5 Race-Cars.com Sprint Race 2 on Sunday with a seventh overall position in 5 F/M and his closest rival, Bill Luken in a similar Lotus 23B, trailing by a great distance. Third went to Graham Adelman in yet another Lotus 23, minus the B.

The large Group 8 field was lead to the checkers by Todd Treffert in a 1973 Porsche 911RS followed by Tom Briest in a Porsche 914/6, despite setting the fastest lap of the race, and James Fuerstenberg in a 1972 MGB. The margin of victory was only 0.559 seconds. Bob Leitzinger and the1969 Datsun 510 finished first in class and fifth overall in the Group 8 Race-Cars.com Sprint Race 2 on Sunday.

For the Historic Formula Feature Race Michael Snowdon in a 1971 GRD 272 F-2 squeaked out a victory by 0.349 seconds over Phil Harris in his 1979 March 79B after 13 laps. Third place was Stevie Hynes, also in a 1979 March 79B, followed by David Porter and Travis Engen. Peter McLaughlin had his day cut short running only four laps in the Ralt RT4
The top five were all on the lead lap.

Next up on the SVRA calendar is the Glenora Wine Cellars U.S. Vintage Grand Prix at Watkins Glen on September 9-11, 2011. Watkins Glen is celebrating the 50th anniversary of the first Grand Prix held on the famed track back on October 8, 1961. The raced marked the first win by Lotus and the only Grand Prix win by Innes Ireland.

With the Grand Prix Festival of Watkins Glen in town that Friday, it will sure be a major gathering for cars and spectators all weekend. Many historic cars will be on display lining Franklin Street prior to touring the original 6.6 miles street course that ran its first event on October 2, 1948. It was the first post-World War II road race in the U.S.
Galleries
Group 2 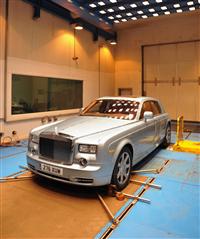