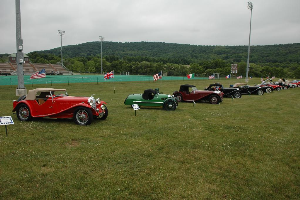 Each car presented at a Concours d'Elegance, having been invited after a discriminating review process, is believed to be perfect.

This years theme was 'The Class of Brass' which provided an opportunity to view some of the most rare and elegant automobiles ever produced. It was a time that most of us do not remeber from personal experience, but love to visit in the recollections of our seniors, and in the romance of our imaginations. We envision it to have been a simpler time - a time when life moved more slowly and with more dignity. Indeed, the engineering and flash of the cars from that era, as viewed on the Concours show field, lend credence to that deduction.

This year marks the 50th and final year for one of the world's most enduring and admired nameplates: Ford Thunderbird. For half a century the name has brought grins, low whistles, and nods of appreciation from automotive enthusiasts everywhere. Be it the two-seaters of the 1950's, the Sports Roadsters of the early 1960's, the Super Coupes of more recent years, the most recent 'Retro-Bird' or any other of the many iterations in between, everyone has their own mental image of the perfect T-Bird.

The concours show-cased many of the Ford Thunderbirds from the early years through the present day. The vehicles were aligned in a semi-circle display that allowed easy examination and admiration of these works-of-art. The evolution of these vehicles is astonishing and one could not help but admire the revoltionary design and elegance of these vehicles.

The Burn Prevention Foundation Concours d'Elegance of the Eastern United States was started sixteen years ago. The Concours was built through the efforts of volunteers for the benefit of the Burn Prevention Foundation. It started as a small show in Reading, PA. It outgrew the beautiful Berks County Campus of Penn State, and moved to the spacious Lehigh University in the Lehigh Valley. The show is now one of the largest in the nation and the third longest running.

Today, there are over 300 volunteers who organize and plan for the event. Due to the popularity of concours and the dedication of its volunteers, over $500,000 has been raised for Burn Prevention charity in the past few years.

The Concours celebrates the history of the automotive industry and its evolutionary blis. In reality, this era was anything but bucolic. The civilized world was engaged in a brutal and costly war. The worst influenza pandemic ever to hit the earth resulted in 20 - 40 million deaths. These were not the 'good-old-times!'

Fire and burn injury presented another grim story. In 1920 the mortality rate for a person who sustained a serious burn was greater than 50%. Treatments were ineffective and oftentimes contributed to complications, terrible scarring and even death.

This was also a time which we faced our enormous hardships head-on and made a resolve to improve conditions. In 1920, President Woodrow Wilson commissioned National Fire Prevention Day, which in 1922 became National Fire Prevention Week. With this symbolic beginning, dramatic improvements in burn care and injury prevention awareness was facilitated. Today, despite a siginicantly larger population, deaths from fire and burn injury are less than 25% of what they were then. Now, an individual requiring acute burn care stands a 97% change of surviving their injuries.
Galleries
Brass