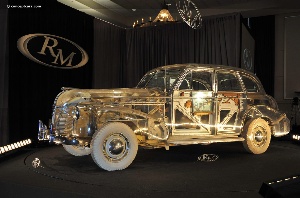 One of just two built and virtually unseen for nearly half a century, the sporting Packard with coachwork by Dietrich spurred a lively bidding war in the room and on the phones to achieve the top-sale of the day. A total of 70 automobiles were presented during the four-hour auction, generating over $7.6 million* in sales with 85% of lots sold.

Formerly known as the Meadow Brook auction, RM's Michigan sale adopted a new home this year – the Inn at St. John's in Plymouth – and once again acted as a prelude to the celebrated Concours d'Elegance of America at St. John's (July 31).

'We are very pleased with the results from our St. John's sale this weekend. They reflect the continuing strength of the market for quality collector cars and paint a positive forecast for the upcoming Pebble Beach auction week in August,' says Gerry Hockin, Chief Operating Officer, RM Auctions.

'Yesterday's sale was very well-attended and the response to our new venue in Plymouth has been extremely positive. We look forward to returning in 2012,' Hockin adds.

In addition to the Packard, an eye-catching 1939 Pontiac Plexiglas Deluxe Six ‘Ghost Car', America's first full-sized transparent car and a highlight of the 1939-40 New York World's Fair, also attracted significant attention from collectors. Remarkably preserved and showing just 86 original miles, it sold for a final price of $308,000 to applause from the audience.