Leaping Cats at the Ready 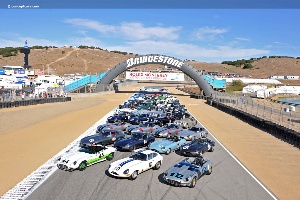 August 2011
For those who love Jaguars and know their ABCs, this year's Rolex Monterey Motorsports Reunion is promising a thrilling if not profoundly educational experience. Jaguar C-, D- and E Types as well as XK120s were among 550 cars practicing today at Mazda Raceway Laguna Seca for the Rolex Monterey Motorsports Reunion, which has Jaguar as its special marque and starts tomorrow with qualifying sessions that will set the grid for weekend racing among 17 groups of historic automobiles. The event, considered an anchor of Classic Car Week currently underway on Monterey Peninsula, also will feature a Jaguar Heritage Display and the up-close and personal encounters with drivers, owners and historians that fans have come to enjoy and respect as they roam freely in the paddock areas to inspect the cars.

Variations on the Theme
Hailing from Massachusetts will be the restoration and racing team Donovan Motorsports, which has returned to Mazda Laguna Seca for the 15th time with a contingent of nine Jaguars to help celebrate the 50th Anniversary of the marque. 'There is nothing in the country like the Rolex Monterey Motorsports Reunion; it's a fabulous event,' said team principal Brian Donovan, adding that Bob Hebert (Monterey, Mass.), his son Art Hebert (Larkspur, Calif.) and B. J. Colaric (New York, N.Y.) will race under the Donovan Motorsports team banner in the Jaguar Invitation Class on Saturday. 'We do a lot of racing each year, but this is by far the most sophisticated event we participate in. It should be interesting, because normally we race against the Corvettes, Mustangs and other ground pounders, but this weekend we will be in an all Jaguar E-Type field. I've always been fascinated with the beauty and the design of Jaguars; they have always set the pace with the grace, and it is always a pleasure to see our six cylinder engines go up against the big V8s and give them a run for the money.'

Terry Larson (Scottsdale, AZ) has brought his three historically significant Jaguars--a 1954 Jaguar XK120, a C-Type Jaguar and a 1958 Lister Jaguar--to the Rolex Monterey Motorsports Reunion. 'My Jaguar XK120 is probably the most actively raced XK120 in America,' said Larson. 'It has about 350 races on it and has never been driven on the street.'

Larson said his friend Mike Silverman will race it this weekend, and he will race his Jaguar C-Type which, too, has been raced quite a bit in this part of the world. 'It was bought new by Sterling Edwards who was one of the originators of the Pebble Beach Road Races,' said Larson, adding that it was crashed in 1953 at Pebble Beach, but after being repaired it continued racing in Northern California, winning Pebble Beach in 1964. 'I bought the car in 1987 and have put over 100 races on it.'

Larson's Lister Jaguar is a works car, which was formally raced by Walter Hansgen in England. 'In the early 1970s, when vintage racing was getting very popular in the USA, this became one of the most actively raced Listers and most successful Lister in American vintage racing,' said Larson.

A Starring Role – The Car Show's Adam Carolla
Though the cars are the real stars at the Rolex Monterey Motorsports Reunion, it will no doubt please the crowd when comedian and car buff Adam Carolla, who debuted in July as host of SPEED's weekly automotive television series 'The Car Show,' takes to Mazda Raceway behind the wheel of his Datsun 2000 on Sunday.

'I love vintage racing,' said Carolla. 'Indy cars and what NASCAR has become are far less interesting to me than these amazing cars from the past. The variety is insane to me, and I love it. Even the guys who think they have seen all the significant cars from the past are occasionally surprised at these events to see something they have never seen before. '
Carolla started racing about three years ago at Coronado, in an ex-Bob Sharp 610 Datsun that he bought on EBay because 'it was funky and cool.'

'It had all the original lacquer paint from back in the day, so I threw it in the back of my garage until my buddy Les said ‘you've got to get out with the car,'' said Carolla. 'I have done a couple of driving schools and some celebrity races, and before I knew it I was at a race event and scared out of my mind-- not so much because I was worried about my safety, I just didn't want to be the guy who caused someone to spin out and damage their car, and then they'd be waiting for me to come around so they could yell at me and say, ‘what are you doing you stupid Hollywood type!' Carolla added that as he has gotten older his taste in cars has changed. 'Right now I really like the big old Batmobile BMW 3.0 and 3.5 cars with the crazy wings and crazy flares and hand painted livery from the early 1970s. With their straight six engines, with their crazy injection and everything--to me those are the coolest cars out here.'