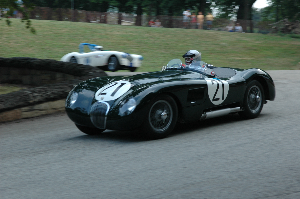 July 2005
The Pittsburgh Vintage Grand Prix's mission is to produce a world-class vintage racing event in order to raise funds that help provide residential care, treatment and support for developmentally disabled individuals in the Pittsburgh region.

The 23rd annual vintage car road race was the final event in a 10 day celebration that included car cruises and shows, and Historic races at BeaveRun MotorSports Complex.

The hills and hairpin turns added to the complexity of the 2.3 mile course that went through Schenley Park. Top speeds were around 100 mph - amazing accomplishments for vintage automobiles, not to mention a very difficult course with very few straight stretches.

Even though the weather hinted at rain, all races were able to avoid precipitation. Group 6 was not as lucky. During the pace lap, a vehicle smashed into a pole and knocked it into the racing lane. The Group 6 race was cancelled. If they would have raced, they may not have avoided the major down-dour that soon followed.

The Pittsburgh Vintage Grand Prix race classes are established using the criteria of the sanctioning body, the Vintage Sports Car Club of America (VSCCA). The PVGP runs eight classes in seven races with each of the first four races running two classes at once.

Frequently classed 'Pre-War', this class includes classic sports and racing cars of the era that ran at the 24 Hour LeMans in France and Brooklands in England. Typical examples include Bugatti, Aston-Martin, Fraser-Nash, Bentley, Riley, BMW, Alfa Romeo, and Morgan three-wheelers.

Featuring classics such as Turner, Osca, Bandini, and Fiat.

Included in this group are cars from 1944 to 1960. Some typical examples are Arnolt-Bristol, Turner, Alfa Romeo, Morgan, Deutsch-Bonnet, Fiat Abarth, MGA, Porsche 500, and Lotus.

This group includes cars from the 1960-64 era. Though not an actual VSCCA class, the PVGP runs it.

These are specially-prepared racers based upon production sports cars. They have been modified to participate as dedicated racers. Some of these cars are hand-assembled and one-of-a-kind. More famous examples include Lotus 6 and 7, Lola Mark I, and various Elvas, Oscas, and Tojieros.

The VSCCA, the sanctioning body for several PVGP Historic races and all Schenley Park races, was founded in 1958 to promote the preservation and operation of vintage sports cars. Originally, eligibility was limited to sports and race cars built prior to 1945, and there were approximately 60 original members - most of who lived in New York and the New England area.

Early events consisted of open practice followed by the individual timed runs against the clock, and car inspection was the responsibility of the car owner or drive with driver qualification left to peer review. If the owner had made 'every reasonable effort to insure authenticity,' the car was permitted to race.

By 1970, VSCCA had hundreds of members covering most states and several countries. Clearly, 'reasonable effort' now needed to be defined. The club instituted mandatory technical inspections and elected its first Chief Steward. Soon after, helmet and fire-retardant clothing rules were instituted and a car classification committee and driver qualification committee were started. The VSCCA is constantly updating aspects of safety for the protection of drivers.

The Sports Car Club of America

Your passion for motorsports may present itself in a number of ways. It's more than just driving, and there are many ways to get involved. Running an event requires a wide variety of talents from an equally wide variety of dedicated individuals. Whether you're talking Rally, Road Racing or Solo, their members enjoy serving in all types of exciting positions. The SCCA provides staff to every major road-racing event from CART to NASCAR and Formula One.

The members are drivers, and they are the men and women in white that are seen on the inside of the track with flags - as close as you can get to the action without driving. They are in the trucks that remove cars broken-down cars from the course, and they are in the pace cars. They time the cars to determine the finishing order and lap times. They build and tare down the Courses, and provide support for races at many tracks and racing venues. They are the announcers; they grid the cars and they park the cars in the Paddock. They control all aspects of the race.

Solo - also known as autocross. They are held on closed courses in which racers try to beat each other's best time through a predetermined course.

Road Racing - Events occur at closed tracks all over the country (such as Watkins Glen, Pocono and Road Atlanta). Trained drivers compete against each other in many classes.

Road Rally - Rallyists are given a set of instructions that are intended to get them from Point A to B on public roads (at the speed limit), without getting lost.


Many thanks to everyone who helped make the 2005 Pittsburgh Vintage Grand Prix a success. From volunteers to sponsors, spectators to drivers, and from vendors to city officials...everyone stepped up to make this unique event happen.
Galleries
Highlights
Group 1: Pre-World War II

Group 6. Under 2 Litre and preservation