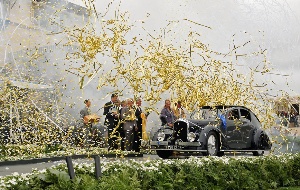 Competitors from 30 states, the District of Columbia, 14 countries and the principality of Monaco brought their prized automotive possessions to California's Monterey Peninsula for judging in 29 classes. In the end, the French-made Voisin was judged the best, a particularly gratifying achievement for Peter Mullin, a self-described 'French car guy.'

'Winning with the Voisin is the most special, significant, rewarding thing that's ever happened to me…outside of marrying my wife (and the Voisin's co-owner Merle),' said Mullin, a 69-year-old financial services entrepreneur and philanthropist. 'There's nothing like the Voisin interior. You can't print the fabric in this car; you have to loom it. This interior is going to last a long time.'

This is the first Pebble Beach Concours Best of Show win for Mullin in 27 appearances at the annual classic car event.

'I've been showing at Pebble Beach for nearly three decades and this is the greatest venue in the world,' he said. 'It's the ultimate thrill, although I wasn't sure I'd actually won. 'We were sitting in the bullpen with the other two finalists (out of a field of 227 cars), the judges pointed at me and I thought I finished third… and then the fireworks went off.'

The other cars nominated for Best of Show were a 1938 Talbot-Lago T150-C owned by Richard Stephens from Auburn, Calif., and a 1929 Bentley Speed Six owned by Daniel Sielecki from Capital, Argentina.

'The Voisin is a four-door closed car, so it's actually an unexpected winner,' said Concours Chairman Sandra Button. 'However, the car's remarkable attention to detail brought it forward during judging and it became a real crowd pleaser.'

'The Voisin automobiles are always influenced by the fact that Gabriel Voisin came from the world of aviation. There was so much craftsmanship in everything he put together. For Voisin, form follows function, and this car features an amazing, interesting upholstery and interior.'

Voisin, who built airplanes during World War I and converted his focus to automobiles once peace was declared, sold more than 11,000 of his usually unconventional, rather expensive vehicles between 1919 and 1939. The distinctive C-25 Voisin, featuring a blend of French curves, highlights Voisin's aeronautic expertise, such as the use of lightweight materials and streamlined designs.

The 2011 Pebble Beach Concours show field included a celebration of Mercedes-Benz and 125 years of the automobile, with nearly 40 Benz, Mercedes and Mercedes-Benz vehicles participating, including the oldest car on the field – an 1894 Benz Victoria Vis à Vis. The Stutz centennial was also highlighted, with 27 vehicles shown. And the 50th anniversary of the Ferrari 250 GTO was featured in a special class, with 21 of the 36 sports cars ever built on display. Other special classes included Rolls-Royce Edwardian Silver Ghosts and Italian motorcycles.

The Pebble Beach Concours occurs every year on the third Sunday in August. Featured marques for the 62nd Pebble Beach Concours, slated for Sunday, Aug. 19, 2012, will include Cars of the Maharajas as well as Mercer and German motorcycles. Other features will be announced in coming months.