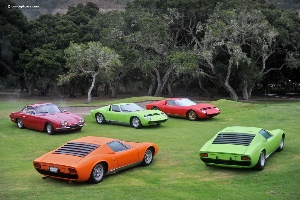 October 2011
Concorso Italiano is one of the many gems that make the Monterey car week such a fulfilling experience for the automotive enthusiast. The show hosts over 800 vehicles of Italian descent on the vast fairways of the Laguna Seca Golf Ranch, just a short distance from the famous Mazda Raceway Laguna Seca racetrack.

One of the features at this year's event was originality and barn-find cars and was sponsored by Fiat North America (who also brought several of their new Cinquecentos). Concorso Italiano also celebrated the 45th anniversary of the Maserati Ghibli, the 40th anniversaries of the DeTomaso Pantera and Maserati Bora.

There were more than 20 original and barn-find vehicles including an alloy-bodied Ferrari 275 GTB and a Vignale bodied Fiat 8V. Two examples with special histories included the Alfa Romeo 1900 CSS Zagato that competed in the Mille Miglia and a Ferrari 212/225 that was given to Henry Ford II by Enzo Ferrari.

The Maserati Ghibli was introduced at the Turin Motor Show in 1966. Its design was courtesy of Giorgetto Giugiaro of Ghia. The name 'Ghibli' continued Maserati's naming scheme after the wind. Ghibli is the name for a collection of winds blowing across the Sahara desert. It was fitted with Maserati's most powerful engine to date, a 4.7-liter V8 that promised power and performance. During the production lifespan (lasting from 1967 through 1973), just 1,149 examples were produced.

At Concorso, at least fifteen multi-colored Ghibli examples were on display. Directly behind the Ghibli display were modern Maseratis, allowing onlookers to enjoy the past and present Maserati supercar.

The DeTomaso Pantera was the result of an Argentinian racing driver (Alejandro De Tomaso), Italian engineering and American muscle. The styling was handled by Tom Tjarda while Giampaolo Dallara was responsible for the structural design. Looking at the vehicle, it greatly resembles that of the Lamborghini offspring. The reasoning for this resemblance could be attributed to Giampaolo Dallara who was also aided in the designing of the Lamborghini Miura.

Among all the exotic beauty that clothed the well-manicured lawn of the Laguna Seca Golf Ranch, the judges selected the 1953 Fiat Stanguellini Berlinetta, owned by Pete Vasquez, as their Best of Show. The car was designed by Scaglione and built by Bertone. It is a one-off prototype built atop a Fiat chassis and powered by a Stanguellini 1100cc engine. The goal was to produce a limited run of these Fiat Stanguellinis, though only two were ever created. These little Stanguellini coupes were built for the Paris and New York Auto Shows in 1954, and they have many similar features to the three Alfa Romeo B.A.T. series of prototypes. Mr. Vasquez had the car restored in the late 2000s.

The 26th edition of Concorso Italiano was spectacular. Hundreds of Lamborghini, Ferrari, and Maserati models in one place is overwhelming and inspiring. 2011 was the third year at the Laguna Seca Golf Ranch, and the venue has proven to be a wonderful location, with ample parking for entrants and spectators.
Galleries
Alfa Romeo