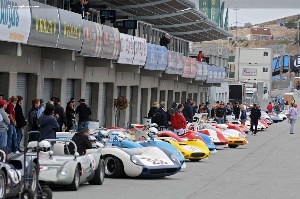 December 2011
The 2.23 mile Mazda Raceway Laguna Seca road circuit is one of the iconic venues in the United States and in the world. Complete with its famous 'Corkscrew' and six-story drop, this iconic circuit played host to another couple of GT racing icons during its Monterey Motorsports Reunion.

On August 19-21 of this year Mazda Raceway Laguna Seca served once again as the backdrop for the Rolex Monterey Motorsports Reunion. Over 550 cars, covering 17 classes would descend through the 'Corkscrew' revitalizing the imagination.

As usual, Monterey would welcome other classes of car that weren't to be missed. Historic Grand Prix/Formula One cars would take to the circuit on Sunday afternoon and would feature such wide and varied examples including Tazio Nuvolari's 1935 German Grand Prix winning Alfa Romeo Tipo B, a Ferrari 312 T5, a Lotus 77 and many other models from throughout grand prix racing's history.

The Can Am class would feature a large number of cars including a rare Shadow MK2 and the McLaren M6A and M8F chassis. The large field would make for some action-packed racing and a lot of great action.

This year's motorsports reunion would feature fewer classes which would allow spectators more time watching some of the other great action. Some of the great action would be provided by Group 5A. This class pitted Sports Racing USRRC cars against the bigger Can Am cars and made for some exciting and tight action.

But besides the Formula One, Can Am and Trans Am classes, the stars of the event would be the special classes set aside just for the anniversary cars. Taking center stage at this year's event was Jaguar and in particular its E-Type chassis.

Launched in 1961, the E-Type would become one of the most famous and desirable of all Jaguars, even in the whole of the automotive industry. Listed in the Daily Telegraph on its list of '100 most beautiful cars' of all time, the E-Type's iconic and elegant lines make it a true work of art. Even Enzo Ferrari would say it was, 'The most beautiful car ever made.' Despite being produced in numbers exceeding 70,000, the E-Type had remained a highly coveted and priceless Jaguar. It was expected that over a dozen of these beautifully designed Jaguars would take to the track on Saturday afternoon.

Then, on Sunday, the Race Group 5B would take to the circuit filled with a compliment of Jaguar XK120s that would battle it out for class honors. Just beforehand, C and D-Type Jaguars will take to the track causing imagination and memory to stir. This will be a special time in its own right as these will be the cars that earned Jaguar its great successes at Le Mans and some of the other great race tracks of Europe.

In all, there would be over 50 Jaguars of different types to make it to Monterey for the celebration of the E-Type's anniversary. But while the sight of the contingent of Jaguars was a truly remarkable sight to behold an even more rich experience to behold would also take to the track on Saturday afternoon.

Listed by Motor Trend Classic as the 'Greatest Ferraris of all Time' and the eighth-best sports car of the 1960s by Sports Car International, the Ferrari 250 GTO is truly something special and unspeakable to behold. Balanced perfectly with its short, blunt rear end and beautifully low-slung and shapely nose, the 250 GTO was a fierce competitor on the track with looks that made the car just intoxicating. It was the epitome of looking good while in the midst of a fight.

Upon its debut at the 1962 12 Hours of Sebring, the 250 GTO would be driven by Phil Hill and Olivier Gendebien to a 2nd place finish behind the Testa Rossa of Bonnier and Scarfiotti. This would be just a glimpse of the success the car would achieve over the length of its lifespan. In fact, the 250 GTO would go on to win the 2000cc class GT Manufacturer's title in 1962, 1963 and 1964. It would be one of the last front-engined cars to remain competitive in the top levels of sports car racing.

With this kind of racing success and history, and the fact that only 39 GTOs would be produced, it is not at all surprising that some examples command upwards of $30 million dollars. And yet, despite their value, there would be nine that would line up to do battle amongst themselves during Saturday's race. Given its incredible success in GT racing it was of little surprise that some of those present at the event still bore scares and other evidences from past races.

While there would only be nine of the extremely valuable 250 GTOs that would take to the track they would be joined by a number of other Ferrari Gran Touring sports cars. In fact, the field would include a number of 250 GT SWBs, 275 GTB/Cs and 330 GTOs.

While the anniversaries of the Jaguar E-Type and the Ferrari 250 GTO were certainly the main emphasis of this year's motorsports reunion there was still so many other things around the circuit for the ticket-holder to enjoy.

Not only were there the Heritage Displays in the paddock area celebrating Jaguar's racing heritage, but there was also a Showcase Stage where classic car enthusiasts could go and listen to stories from those fortunate enough to have piloted some of the incredible machines situated around the circuit.

Playing a lesser, but not less important, role in the weekend's events would be the celebration of the 20th anniversary of Mazda's sponsorship of the Laguna Seca circuit. This fact would not be trivialized or treated flippantly by Mazda as they would do something absolutely special to mark the occasion. Not only would some of Mazda's famous GTP cars, like the RX-792P, come and play a part in the ceremonies, but perhaps the most famous Mazda Sports Prototype would also come to be part of the special event.

The Mazda 787B, serial number 002, would be carefully packed up and shipped to the United States to be part of the proceedings. Serial number 002 was the actual 787B that earned Mazda its historic victory in the 24 Hours of Le Mans back in 1991. Even to this very day it is still the only Japanese-made car to claim the overall victory in the famous French classic.

In addition to the actual race-winning 787B, another 787B, which finished 8th during that same year's 24 hour race, would also be part of the special moment. The whole experience would be accented by one of the RX-7 GTO cars, an RX-792P and a couple of Mazda-powered Group C2 Lolas. The whole scene would be a truly memorable and touching moment as the screams from the rotary engine would serve as a truly fitting celebration of Mazda's racing heritage, success and partnership with Laguna Seca.

Filled with legendary cars, personalities and events, this year's Rolex Monterey Motorsports Reunion was yet another action-packed event that offered something for everybody and delighted all of the senses. While all about the cars that made the history, the exhibits and the hard work of so many people helped to make this year's event yet another successful and historic moment in its own right.