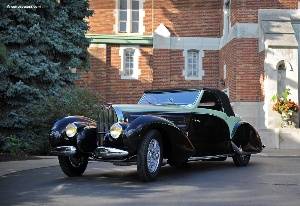 September 2011
The 17th Annual Glenmoor Gathering of Significant Automobiles was held in mid-September at the historic Glenmoor Country Club near Canton, Ohio. This year's features included Avant Grade: Early Front-Wheel Drive, Sixteen Cylinder Motorcars and the Automobiles of Darrin, including a group of 1938-42 Packard Darrin automobiles.

These three featured groups were joined by several other categories which accounted for over 200 classic automobiles, trucks and motorcycles on the show field. Other weekend activities included a Countryside Tour, automotive seminars, cocktail party and Gala Dinner, cooking demonstrations, a junior Judges' program, and a classic car auction.

The Cars of Howard 'Dutch' Darrin
This was a stunning and well curated display of Darrin bodied cars which included work by 'Hibbard & Darrin' in the 1920's and 'Fernandez & Darrin' in the 1930's. Coachwork by these two European-based companies was installed on equally legendary automobile chassis such as Hispano-Suiza, Duesenberg, Rolls-Royce and Minerva.

By the late 1930's, Darrin had returned to the United States. Landing in southern California, he designed and built the first Packard Darrin one-off customs for the Hollywood crowd. Eventually, these customized convertibles and sedans became part of the Packard line-up. After World War Two, Darrin contributed to the designs of the 1947-50 Kaiser and Frazer automobiles. Most noteworthy of these post-war designs was the Kaiser Darrin sports car, which featured a fiberglass body and sliding entry doors.
The Darrin-bodied Packards were given the most real-estate at the Glenmoor Gathering in the 'Cars of Darrin' category. This impressive display housed several opened and closed examples, including many of the popular Convertible Victorias. Not surprisingly, many of the cars were once been owned by Hollywood royalty, including celebrities, Hollywood film stars, as well as businessmen.

Sixteen Cylinder Cars
The car that commonly dominates the Sixteen Cylinder category is the Cadillac, with their legendary Model 452. Cadillac led the way in the 'cylinder wars' when they introduced their V-16 in January of 1930. In September of that year they introduced a V-12 to complement the existing V-8. The V-16 displaced 452 cubic-inches (thus the 452 designation) and offered 175 to 185 horsepower.

Catering to every wish and desire their customers could possibly conjure was an incredible list of 70 body styles from which to choose. Pricing began in the high-$5,000 and quickly escalated.

At the Glenmoor Gathering, the majority of the cars that filled the Sixteen Cylinder category were not Cadillacs, but Marmons. It was a welcomed change for the 'underdog' to be given their day in the sun.

The Marmon Sixteen was introduced in November 1930, 11 months after Cadillacs Sixteen appearance. Deliveries did not begin until April of 1931. Marmons' Sixteen was an engineering marvel, but it was a case of 'too much, too late.' The Great Depression was crippling the market, and it was difficult to market a $5,000, 200 horsepower luxury automobile. By May of 1933, the company was in receivership. The company that won the first Indianapolis 500 race in 1909 had become part of automotive history.

Nearly 400 examples of the Marmon Sixteen were produced during the short three year life span. At Glenmoor, an impressive six examples sat shoulder-to-shoulder, representing a rare opportunity to see this many Marmon Sixteens on one show field.

Joining the Cadillac and Marmon Sixteens was a Peerless Sixteen Prototype. The V-16 motor develops 173 horsepower and aluminum was used extensively in the car's construction, including the motor, chassis and body. The design and construction of the body was performed by the Murphy Body Co. of California.

Avant Grade
Very few automobile companies thought it wise to employ a front-wheel drive setup. This meant the front wheels were responsible for steering, propelling the vehicle, and carrying the bulk of the weight. Only a handful of companies attempted this unorthodox design, with the Cord, Ruxton, and Citroen having the most success.

Though there were drawbacks, there were also benefits. The unique driveshaft and transmission setup allowed them to sit lower than other cars of the time. This gave them a low center of gravity which improved performance. Ruxton added excellent balance to their vehicle's performance by having their transmission divided into two pieces by placing lower and reverse gears in front of the differential, and second and third behind it.

Before road-going FWD drives became 'popular,' Harry Miller experimented with the design on the race track. His automobiles dominated the line-up at the annual Indianapolis 500 race during the late 1920s. Between 1922 and 1928, 83-percent of the cars that qualified at Indianapolis were Millers. The race was won by Miller front wheel drive cars in 1926, 1928 and 1929.

At Glenmoor, the car that won the Indianapolis 500 race in 1928 was on display. Joining it were several examples of the Cord (including the L-29, 810 and 812 model), a gorgeous low-slung Ruxton, and three intriguing European cars. The 1938 Georges Irat 6CV model was introduced in 1935 and was powered by an 1100cc Ruby engine which powered the front wheels. The DKW Mesiter Klasse Sedan with coachwork by Karmann was making its first show field appearance. It is believed to be the only 1953 DKW Meister Klasse in the US. Power is from a two-stroke, 690cc motor which offers 33 horsepower. On the hood is a four-ring emblem of Auto Union, which was comprised of (at the time) Audi, DKW, Wanderer and Horch.

The final European model in the FWD category was the Citroen Traction Avant (French for 'front wheel drive). Production lasted from 1934 through 1956, albeit with subtle changes over the years. Approximately 760,000 were built during that time. Though it was not the world's first front wheel drive, it was the world's first front wheel drive steel monocoque (unibody) production automobile. The example that was on display - a sedan - is essentially original that has been maintained rather than restored over the years.

Best of Show
Standing on the hill, near the Glenmoor Country Club and overlooking the show field, there were several potential candidates for 'Best of Show' honors. The sixteen-cylinder Marmons and Cadillacs, a brightly colored 12-cylinder Auburn, and the Darrin-bodied cars had strong potential. In the European Category, there was a Peugeot 402 Cabriolet with coachwork by Pourtout, a Talbot T150C SS Coupe with coachwork by Figoni & Falaschi, and a Bugatti Type 57C Aravis Drophead Coupe with coachwork by Gangloff that were poised to take the coveted honors.

The two most likely cars to win 'Best of Show' was the Bugatti or the Talbot. Both had the unmistakable beauty, elegance, and mechanical provenance to make them the best on the show field. Examining these two cars up close immediately revealed the winner. One was perfectly restored, the other was in original, unrestored condition. The safe bet was on the restored car, but for shock value, we thought the judges may select the original, unrestored Talbot.

After careful deliberation and scrutiny, the Judges selected the restored Bugatti Type 57C as their favorite. The car, owned by Bill Johnson and Ron Ellenbass of Richland, Michigan (the Off-Brother Collection), is one of four with the Gangloff Aravis body. Power is from a 3.3-liter straight-8 supercharged power-plant, which is basically a de-tuned version of the Grand Prix Type 59 engine. The Type 57C is recognized as being the most sporting of all non-racing Bugattis, and was the most elegant vehicle at this year's Glenmoor Gathering.

Debuts
Aside from above mentioned 'first show appearances', there were two vehicles that fell into this category. The Polynesian (1950 Oldsmobile) was an early custom-built vehicle by Valley Customs of Burbank, California for Jack Stewart of Canton, Ohio. It was featured in Hot Rod magazine in September of 1953 and won 'best of show' at the first Michigan Auto Rama in 1953. It disappeared for many years, spending time in storage where it slowly deteriorated. In 2005 a full restoration was undertaken by the current owner. It made its first public appearance in more than 40 years at this year's Glenmoor Gathering.

The other car coming out of hibernation was the 1966 Vivant '77' Prototype Roadster. The car was the work of Herb Adams and features a futuristic all-aluminum body that was completely hand formed. It made its debut at the Detroit Autorama where it was highly lauded. After several other show appearances, the car disappeared from view. Having recently been discovered, the Glenmoor Gathering was fortunate to have the Vivant for its first public showing in over forty years.
Along with the 'first show appearance' was the debut of a freshly-restored 1937 Cord 812 phaeton formerly owned by western film star Tom Mix. The Tom Mix Cord had gone through a succession of owners over the years but had never been restored to its original condition, as owned by Mix.

Conclusion
With a plethora of automotive sheet metal, gorgeous weather, a packed and diverse schedule, and a scenic backdrop, the 17th Annual edition of the Glenmoor Gathering continued its tradition of 'wowing' and educating thousands of eager spectators. The list of judges were equally impressive and guaranteed that the most deserving vehicles were awarded amongst their peers.
Galleries

In the Great European Tradition