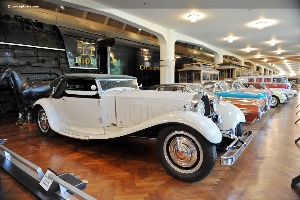 January 2011
The Henry Ford Museum is a National Historic Landmark located in the Metro Detroit suburb of Detroit, Michigan. It is the nation's 'largest indoor history museum' complex. It was built in 1929, named after the noted automobile industrialist Henry Ford, and designed by Robert O. Derrick. The original purpose of the museum was to preserve items of historical significance and portray the Industrial revolution.

Vehicles in the collection include automobiles from many marques, including Packard, Duryea, Locomobile, Thomas, Bugatti, Overland, and more. Perhaps the most impressive vehicle is the Bugatti Royale Type 41. That vehicle is considered the ultimate status symbol and is one of the biggest, rarest, and most desirable cars in the world.
Galleries
Gallery