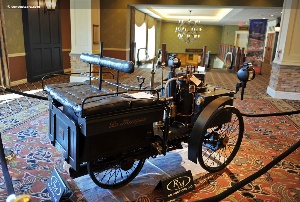 Commissioned by French entrepreneur, Count de Dion and named ‘La Marquise' after his mother, the 127 year old vehicle drew a standing ovation from the audience as it drove onto RM's Hershey auction stage. Attracting a starting bid of $500,000 and immediately jumping to $1,000,000, bidding moved swiftly to applause from the crowd, with the gavel eventually falling at an extraordinary $4,200,000. The final sales price of $4,620,000 includes 10% buyers' premium.

'We were honored to have been entrusted with the sale of this most important motor car from the renowned collection of the late Mr. John O'Quinn. The world's leading automotive collectors recognized the incredibly rare opportunity the sale represented, as was reflected in the spirited bidding and impressive result,' said Rob Myers, Chairman & Founder, RM Auctions following the sale.

The new owner joins an elite list of just five collectors to have claimed ownership of La Marquise over its well-documented history. In addition to being the world's oldest running motor car, La Marquise's impressive provenance includes participation in the first automobile race in 1887, where it reached a top speed of 37 mph on the straights, along with a double award at the famed 1997 Pebble Beach Concours d'Elegance. In addition, La Marquise has also successfully completed four London to Brighton runs in the UK.
Galleries
Loading...
Loading...