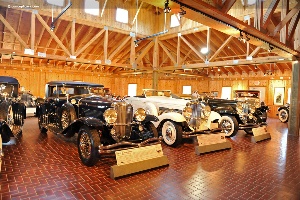 January 2011
The Gilmore Car Museum began in 1963 as the hobby of Donald S. Gilmore when his wife, Genevieve, gave him an antique car for his birthday —a 1920 Pierce-Arrow 'project car.' With the help of some friends, the auto was placed under a tent and a full restoration followed. The hobby soon grew into a collection of over 30 automobiles. Mr. Gilmore purchased 90 acres of farm property and had several historic barns dismantled piece by piece and moved to the site. It was Mr. Gilmore's wife who suggested the idea of turning the collection into a museum where future generations could enjoy the restored cars for years to come. The Gilmores established a non-profit foundation, and opened the museum to the public for the first time on Sunday, July 31, 1966. Donald Gilmore passed away in 1979, and Mrs. Gilmore in 1990, but the legacy they began continues to grow.

Today, the site includes eight historic barns, a re-created 1930s service station, a small town train station, and nearly three miles of paved roads. It isn't uncommon for guest to catch a glimpse of one of the vintage cars or the authentic London double-decker bus in motion. And if you visit on a weekend or special show, don't be surprised if the driver asks you to hop in for a nostalgic road trip! Besides experiencing the wonderful collection of automobiles, you might find yourself reliving (or even making a few) childhood memories viewing the nearly 75 vintage pedal cars on exhibit. One of North America's largest displays of automotive hood ornaments and name badges can also be found in the combined collections of The Gilmore and CCCA museums.