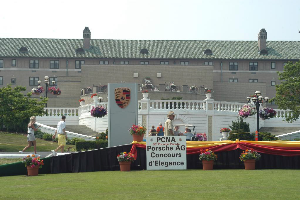 August 2005
The Concours d'Elegance and Car Show, sponsored by Porsche AG and Porsche Cars North America at the 50th Porsche Parade in Hershey, PA were held on the golf course behind the historic Hotel Hershey. From this location, Parade attendees were able to enjoy an unparalleled, panoramic view of the surrounding Pennsylvania countryside, while viewing over 250 Porsches being judged. Additionally, over 70 historic and racing Porsches, some of which have not seen publicly in decades, occupied Fairway 1 in the Historic Porsche Exhibition. Many previous winners of PCA's coveted Manhattan Concours Award were also exhibited. Fairways 4 and 2, in the heart of the course, were the main arenas, where entrants in the Restoration, Preservation and Preparation Groups were judged. PCNA and PAG also had a special exhibition of Porsches.

The main Concours judging areas were cool, shaded areas under tall trees on either side of long fairways, with an open center section from which spectators could admire the entire field.

New this year was the PCA Concours Awards Ramp, in the tradition of the Pebble Beach Concours, on which first place Class winners may choose to receive their trophies. Set below the steps leading to the classically designed Hotel Hershey, the PCA Concours Ramp proved to be a special experience for the winners. Other class awards and trophies were awarded to the entrants, on the field at their cars, as soon as the results were certified.

Also new this year was a special Porsche Corral and Car Show on nearby Fairways 5 and 9, where Porsche owners were parked by model groups. All Porsches were entered into the voting for a 'People's Choice' awards as part of the car show. Awards were given to best example of the various models - and 'Best of Show'.

The turnout for this event was significant. Shuttle buses were used to transport spectators from the Hershey Lodge to the Concours site. The buses began rolling at 5:30 am and ran continuously throughout the day.

The 50th Parade Historic Exhibition at the Parade Concours d'Elegance is comprised of three special groupings of Porsches. The Historic Cars, the Manhattan Trophy Winners, and the Original Owners Porsches Group. Some of these magnificent and notable Porsches were also exhibited in the 50th Parade Museum at the Hershey Lodge.

The 50th Anniversary Parade was a very special exhibition to celebrate the racing heritage of Porsche. The result was a Historic Car Exhibition that featured close to 100 significant racing and limited production performance-oriented Porsches.

These cars were arrayed along the first fairway of the historic Hershey Hotel's golf course. The same golf course was also the home of the 50th Parade Concours and the Porsche parking corrals. In all there was well over 500 Porsches for the attendees to see and enjoy 'up on the hill.'

The Historic Car Exhibition received support from owners, collectors, and museums - including the factory museum at Porsche AG headquarters in Stuttgart.

The Parade of Porsches was one of the original Parade activities and provided an opportunity for the band of new marque owners to enjoy their Porsche automobiles. For a period of years, the Parade of Porsches was not held because of difficulties with traffic, safety, congestion, and other factors. At Boise, ID, the tradition was revived and lived again at Hershey! The Goodyear Corporation Division Dunlop Tires was the Sponsor for this event.

Thanks to Kyle McMullen and Sarah for attending and documenting the Concours. When describing this event, they unanimously agreed that it was overwhelming and amazing. With over 850 Porsche's present, it was understandable. After spending hours at the event both were considerably sun burnt.

Thanks to all the sponsors, organizers, owners, enthusiasts, and everyone who made this event happen. It was enjoyable and monumental.
Galleries
Racing

Prototypes and the Unique