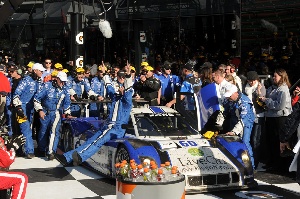 The team of Oswaldo Negri, John Pew, AJ Allmendinger and Justin Wilson in the No. 60 Michael Shank Racing with Curb-Agajanian Ford Riley survived a tight battle for the lead in the final hours to take home the grueling twice-around-the-clock challenge by a 5.198-second margin of victory.

'I feel like we deserved it to be honest,' Shank said. 'I think we've worked hard. I don't make any excuses for that. We paid our dues for sure and I hope it can take us to new cool places in the coming years.'

The winning No. 60 car had an average speed of 126.300 mph and turned 761 laps, 2709.16 miles, nearly equivalent of a trip from Daytona Beach, Fla., to Los Gatos, Calif., Allmendinger's hometown.
The number of laps completed by the winning Shank team was one lap shy of the Rolex 24 all-time record set back in 1992.

Allmendinger, who recently signed with Roger Penske in the NASCAR Sprint Cup Series, drove the final stint in the No. 60 car. It was Allmendinger's seventh time racing with Shank in the Rolex 24.

'I feel very fortunate,' Allmendinger said. 'This is one of the reasons why I love this race, because it really kicks off Speedweeks. It's such a prestigious race. It's one of those races you want on your resume and you want to say that you were part of a victory. It's amazing. I'm going to cherish this.'

Said Negri: 'It's a cool way to start the year. Being with Mike for such a long time, what makes it special is that he wants to win as bad as I do. It's just so cool. To have a fiery AJ, a very calm and fast Wilson and John Pew on the team, I think we had a dream team this year.'

Finishing behind the No. 60 car was the pole-winning No. 8 Starworks Motorsport Ford Riley and Ryan Dalziel, Alex Popow, Lucas Luhr, Allan McNish and Enzo Potolicchio.

'I absolutely knew that we had the potential to do it,' Lally said. 'The people that were assembled by John to start Magnus Racing just two years ago were top notch guys, and he took direction from some really well seasoned vets, and he steered the ship in the right direction and basically put together a really solid, strong effort.'

With just under two hours remaining, Lally, behind the wheel of the No. 44 Porsche, slipped past Leh Keen in the No. 59 Brumos Racing Porsche to take the lead for the final time.

'The Brumos car was really strong,' said Lally, who earned 2011 NASCAR Sprint Cup Series Rookie of the Year honors. 'There were lot of really strong race cars out there, and we were a little bit off sequence. I think I had a little bit fresher tires than he did, so I was able to get a little better run out of the bus stop there. The draft here is so huge that I was able to come up alongside. We were really, really close.'

The 50th Anniversary Rolex 24 At Daytona featured the return of 29 past winning Rolex 24 overall winning cars as well as 47 former champions with over half of them competing in the race. 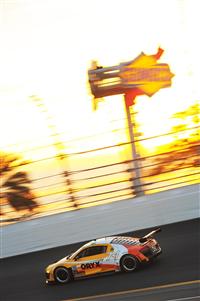