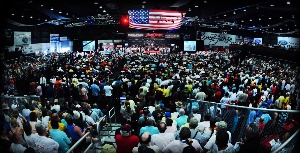 Additionally, a record number of ecstatic attendees including buyers, consignors and enthusiasts totaling more than 270,000 were on hand to partake in the excitement. This represents a 32 percent increase in sales and a 16 percent increase in attendance versus 2011.

An astonishing 1948 Tucker Torpedo (Lot #5008) from the Ron Pratte Collection, one of only 51 ever made, was the top selling vehicle, garnering $2.915 million; a world record for the sale of a Tucker. Following the Tucker in top sales was an ethereal 1947 Bentley Mark VI Coachworks by Franay (Lot #5005) with a sale price of $2.75 million. Rounding out the top three was a breathtaking 1954 Mercedes-Benz 300SL Gullwing with only 4,159 original miles—the lowest mileage model known to exist. This exceptional Mercedes also represents a world-record for the highest-selling price for a steel-bodied 300SL Gullwing model. All three vehicles sold on Saturday, Jan. 21 and were part of the new Barrett-Jackson Salon Offering Collection, a selection of ultra-rare and highly-sought classic cars.

Additional sales records and milestones include:
• An extraordinary selection of timed-lot vehicles called the 5000 series on Saturday, Jan. 21, which comprised The Salon Offering Collection and a number of other highly-sought classics, totaling 31 collector cars.

• More than $5.8 million raised for local and national charities through the sale of 22 vehicles, including generous proceeds from sales and donations for the Barrett-Jackson sponsored ChildHelp Charity to benefit victims of child abuse and neglect.

• Nearly half of the Consigners were also new.

• A surge in pickup trucks consignments and sales: More than 150 pickups were auctioned, accounting for more than 10 percent of sales. One example is an amazing 1948 Chevrolet Coe (Lot # 430.2), fresh off a two-year full restoration, which sold for a world-record breaking $97,900.•
• The first-ever DIY lifestyle exhibit that featured a how-to on getting your car on the auction block.

• A first-ever mobile social media boutique for grassroots outreach from guests of Barrett-Jackson.


'The excitement over the high-end classics in the 5000 series and the Salon Offering Collection this year is beyond words,' said Craig Jackson, Chairman and CEO, Barrett-Jackson. 'The record crowds were the most enthusiastic I have seen them in years. I'm humbled to say that we had a record number of cars cross the block and were able to revisit our roots by offering some of the purest classics and concepts on the market with extraordinary results. Additionally, we still maintained our ‘something for everyone' philosophy by providing the largest selection of vintage cars and trucks in our 41-year history.'
Galleries
The cars