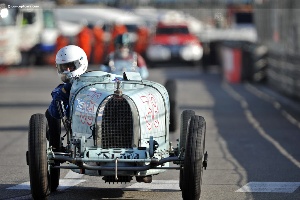 December 2012
The annual Monaco Grand Prix Formula One event, held on the Circuit de Monaco, began in 1929 and has become one of the most prestigious automobile races in the world. The narrow streets of Monaco serve as the temporary 2.075 mile track, featuring tight corners, elevation changes, and even a tunnel. Today, drivers still navigate the uphill climb to Casino Square, before turning down to Mirabeau and the Loews Hairpin, before entering the famous tunnel that runs into the harbor-side chicane, a notorious spot for accidents. From there, drivers sprint past many of the harbor's large yachts toward La Piscine and the swimming pool that the corner is named after. This is followed by a quick right turn into La Rascasse before a run down into the Boulevard Albert and to the finish line. This demanding course requires drivers to change gears 54 times per lap, or 4,200 times over the course of the 78-lap race.

In 1997, a one-off Monaco Historic Grand Prix (Grand Prix de Monaco Historique) was held, later becoming a bi-annual event beginning in 2000. This year, the event once again paid tribute to its past, with the 8th Monaco Historic Grand Prix. Organized by the Automobile Club de Monaco, the 7-race program was filled with drivers from 20 difference countries. 87 British drivers and 31 Americans had the strongest presence, following by 23 French, 19 Italian, and 10 German drivers. 14 Monegasque drivers defended the colours of the Principality throughout the various races.

The Historic Grand Prix is held just two weeks before the Monaco Formula 1 Grand Prix, on the identical circuit, with the same infrastructure, organization and trackside support teams. The selection committee did a commendable job by selecting only cars that conform to original specifications. The result was a veritable museum on wheels comprised of 226 historic racing cars. The range of cars dated before 1947 to a selection of Formula Three cars, including Ferrari and Lotus, that dated from 1971 to 1984. Legendary and famous drivers - many of them driving cars from their own collections - included former drivers such as Dieter Quester (BMW), Fabien Giroix (DTM), Arturo Merzario (Ferrari, Williams) as well as celebrity drivers such as Tony Smith, manager of rock band Genesis, and Nick Mason, the drummer in Pink Floyd.

Race Categories
Practice and qualifying begin on Friday and continues into Saturday and are used to decide the starting grid for Sunday. The racing is intense with closely fought battles throughout all of the fields.

The Pre-1952 Voiturettes and Grand Prix Car category held the most senior vehicles on the course. The list of vehicles that toe'd the starting line included legendary names such as ERAs, Bugattis, Alfa Romeo's and Maserati. Winning for the third time in a row at Monaco, Julian Bronson was able to hold-off Paddins Downling in a B-Type ERA, to claim the overall victory in his ERA R4D.

The Pre 1961 Grand Prix and Formula 2 Car (Series B) category had both mid- and front-engined Grand Prix cars. One of the favorites in this category was Duncan Dayton, who has won more times at the Monaco Historic Grand Prix than any other driver. His 10 victories and his front-engined Lotus 16 earned him a front-row spot on the starting grid. Off the line, it was Roger Wills in a Cooper T53, who took an early lead. In close pursuit was Dayton, who was able to pass Wills, only to watch Wills regain the lead. The battle was short lived, as Dayton spun out, leaving Wills at the front and a relatively easy victory.

The Pre 1953 Sports and Sports Prototype Cars (Series C) category added extra variety to the track, being the only category to feature closed-wheeled sports cars. Cars in this group included the Jaguar C-Type, Allard J2X, Frazer Nash, and Aston-Martin DB3. Well in front of the group for the entire weekend was Alex Buncombe driving the Jaguar Heritage Racing C-Type.

There were two 3-Liter Grand Prix car categories. The first was for Pre 1973 GP cars. Unfortunately, the top two favorites had a bit of bad luck. Roger Wills was sent into the wall after an collision with slower traffic during practice. Mechanical issues and the red flag from Wills crash meant Duncan Dayton was not able to complete a flying lap and had to start from the back of the grid. After an impressive display of driving, Dayton fought his way to 8th position on the opening lap. He continued to work his way up to second until a spin dropped him back in traffic. Andrew Smith, driving a March 701, led during the opening laps of the race, but surrendered his lead after suffering problems of his own. Dayton was able to navigate his Brabham BT33 back to the front of the race, and somehow claimed his 11th victory.

The other 3-Liter GP category was for 1973-1978 cars. Most of the cars in this group were powered by the Ford Cosworth DFV V8 engine. This was the last race of the weekend, and unfortunately, was blanketed with rain. The track was soaked, but thankfully it did not deter most of the participants for competing. Though a shortened race, Michael Lyons driving his father's Hesketh 308E, was able to lead from pole position to checkered flag. Nearly a minute behind was second place finisher, Verdon-Roe followed by Mauro Pane in a Lola T370.

The Pre 1985 Formula 3 Car category is a relatively new event to the roster, having been added for the first time in 2010. It was a popular group with so many entries that the field was split into two groups based on their racing number.

After several parade laps due to re-shuffling on the race grid (due to mechanical issues and stalled vehicles), the race was one of the more hotly contested races of the weekend. Scheduled for 18 laps, the cars were able to complete around a dozen laps before rain brought the race to a premature close. Ben Barker, driving a Lola T670, won the race followed by Matteo Marzotto in second and Paolo Barilla in third.

Auctions
The plethora of automotive enthusiasts and collectors in one location has resulted in three auction houses offering a wide selection of automotive machinery for sale. This list includes RM Auctions, Bonhams, and Coys. Many of the highlights from RM Auction's sale were painted red, including the Ferrari 206 S Dino Spyder, Ferrari 625 TRC, Ferrari 375 MM Spider, and the Alfa Romeo T33/2 ‘Daytona'. The top sale went to the Ferrari 625 TRC Spider which sold for 5 million Euros ($6.5 million US) including fees. Total sales for RM exceeded €33.5 million with 87 percent of the vehicles finding new ownership.