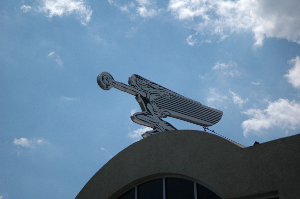 August 2005
The National Packard Museum opened on Sunday, July 4th, 1999, the first day of the Packard Centennial Celebration in Warren, Ohio. This 7500 square foot facility sits next to Packard Music Hall and Packard Park in the city's historical district.

Since 1990, the museum had occupied three temporary sites until a permanent home for the Packard histories was located. In October 1996, the City of Warren offered the museum a 7.5 acre site of a former swimming pool on Mahoning Avenue in Warren. The estimate of $500,000 to convert the pool building and grounds into a museum prompted a capital fund-raising campaign.

The grounds and adjacent parking facilities are suitable for large outdoor events and exhibits.
Galleries
The Vehicles