L'Estage and Richard seize another victory at STPR 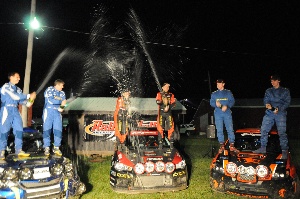 June 2012
The Rockstar Energy Drink Team of Antoine L'Estage, of St-Jean-sur-Richelieu, Quebec, and Nathalie Richard of Halifax, Nova Scotia, took the top podium finish in this weekend's Waste Management Susquehannock Trail Performance Rally®, presented by Citizen's & Northern Bank today with a time of 1:39.15.5, repeating their victories from 2010 and 2008. STPR® was the fourth round of the Rally America National Championship.

Starting first, they had to battle to regain position after fellow Canadian Leonid 'Crazy Leo' Urhlichich, of Thornhill, Ontario, and co-driver Carl Williamson of Ammanford, Wales, gained 30 seconds in Stage 3 in their 2007 Subaru and moved into first on Day 1 of STPR®. And hot on both team's heels was the 2012 Subaru WRX STI, of the Subaru Rally USA Team of David Higgins, of the U.K.'s Isle of Man, and co-driver Craig Drew, of Bristol, U.K.

It did not take long for L'Estage to recoup the lead. After suffering overheating problems yesterday, his crew diligently worked through the night replacing the engine in the 2011 Mitsubishi Lancer Evolution X to bring the car back into prime condition.

'We changed the engine, so it was a team win. We had to push big because we started 30 seconds behind,' L'Estage said. 'We then had a 30-second lead in Stage 9 so we just took it easy.'

Higgins and Drew managed to stay in the top three, but L'Estage was not going to surrender easily, and the Subaru Rally USA Team finished second with a time of 1:40.30.6, barely a minute difference.

L'Estage and Richard are just coming off another victory at the Canadian Rally Championship event, Rocky Mountain Rally, in Alberta, Canada last weekend.

'By the time we got the car from the West Coast back to Vermont, we had one day in the shop with the car before heading here,' L'Estage said.

In the Super Production class, OPR Racing's Lauchlin O'Sullivan from San Francisco, Calif., and Scott Putman, of Richfield, Minn., had their own battle with the Dent Sport Rally Team of Ramana Lagemann, of Somerville, Mass., and Christine Beavis, of San Diego, Calif. OPR's 2003 Mitsubishi Evo and Dent Sport's 2011 Subaru Impreza WRX STI finished first and second, respectively, with less than 15 seconds separating the two at the finish. Third on the podium was Travis Hanson, of Woodsville, N.H., and Terry Hanson, of Williamsburg, Mich., in a 2007 Subaru Impreza WRX STI with a time of 1:48:30.7.

When the Australian Summit Rally Team's Will Orders, of Melbourne, and Toni Feaver, of Perth, lost the engine in their 1989 Nissan Silvia, Chris Duplessis, of Bethlehem, N.H., and co-driver Alex Kihurani, of Philadelphia, Penn., took the lead going into the final stage in the Two-Wheel-Drive class in their 2012 Ford Fiesta R2 with a time of 1:49:46.2. This allowed the second Summit Rally Team of Ross Allan, of Melbourne, Australia, and Scott Allan, of Upper Beaconsfield, Australia, to pilot their 1991 Nissan Silvia into second with a time of 1:54.04.3 followed by Chris Greenhouse / Brian Johnson's 2003 Dodge Neon SRT4 not far behind with 1:54:49.7.

'Because Will had issues with the motor, we took over the lead, happily, and held on,' Duplessis said. He added they only finished the car on Thursday, arriving too late to run the course reconnaissance.

Final results, as well as scores from the individual stages, are available on Rally America's website at http://rally-america.com/events/2012/STPR/results. Once there, for those who prefer a printable version, use your browser's scroll key to the bottom of the page and click on the 'Print' tab.

The competition continues on July 13-14 when round five of the Rally America National Championship heads to Newry, Maine, for the New England Forest Rally. Visit www.rally-america.com for details.