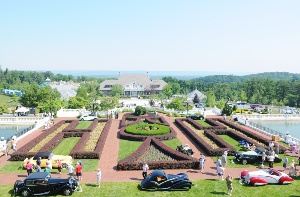 June 2012
This was the second annual presentation of The Elegance at Hershey, and though it is still in its infancy, is already a very mature, well established, and well-coordinated event. It is amazing that an event this young has been able to attract a plethora of quality collector cars. But pulling back the curtain - even just slightly - has one saying 'oh, that's why!' Two instantly obvious reasons are the location and the list of judges.

The event is held at The Hotel Hershey, a Four Star and Four Diamond resort, located in Hershey, PA. It is a venue with an expansive recreational complex, premium guest cottages, boutique shops, meeting and banquet space, and a beautiful garden. It has the space to accommodate this growing event, enough activities to keep the entire family entertained, and a beautiful backdrop to enhance the elegance of the showcars.

The list of judges includes many knowledgeable and talented individuals. They bring a wealth of knowledge about the automobiles and the collector car market, as well as relevant and abundant information about judging and organizing major concours events.

Perhaps another reason for the success is the proximity to the AACA Museum and AACA Library & Research Center. Not only does this make it an automotive Mecca, but also a resource for many dedicated and qualified volunteers.

Behind every great endeavor, is a brilliant individual. For the Elegance At Hershey, this great man was John W. Rich, Sr. He was the founder of the JWR Museum in Frackville, PA and a longtime member of the AACA. A self-made man, Mr. Rich built an incredible business empire that allowed him to amass an impressive, world-class automobile collection. It was his desire to create a car-related event that would combine two things: his passion of the automobile and his true wish to find a cure for Juvenile (Type 1) Diabetes. Mr. Rich (1925-2012), before his passing, was able to see his desire come to fruition. Not only has the event become a highlight on the automotive enthusiast's calendar, but that inaugural event has helped raise $200,000 for charity.

The Cars
To create a quick mental image of the vehicles at this event, think of all the Best of Show winners from concours events from all around the world. Of course, this is not entirely accurate, but it should provide some insight into the quality of cars on display at The Elegance.

The focus for The Elegance is custom-coachwork Classics and unique sports/ racing and special interest vehicles with historical importance produced prior to 1960. It is an event that showcases quality over quantity, with around 60 carefully selected automobiles invited to the event. This year, there were four Packards, four Pierce-Arrows, four Duesenbergs, two Isotta-Fraschinis, two Delahayes, a Talbot-Lago, Bugatti, and Delage (among others).

At many concours events, the Best of Show often comes from the 1930's European or 1930's American category. There are usually a handful of cars in those categories and many times, one stands out as the clear winner, making it 'easy' to predict which car the judges might select as their favorite. At The Elegance At Hershey, over half of the cars were from the 1930-1940 era. Many were Best of Show winners at major concours events. Trying to predict 'the best of the Best,' was very perplexing. At the end of the day, after the judges had made their inspections, debated their findings, and tallied the scores, the 'Best of Show' was announced.

The Bugattti Type 57C Aravis Drophead Coupe with coachwork by Gangloff was a contender. Along with its beauty, mechanical ability, and history, it was the Amelia Island Concours and Glenmoor Gathering 'Best of Show'. The Delahey 135 Torpedo Cabriolet by Figoni & Falaschi had won Best of Show at the Pebble Beach Concours in 2000. The Talbot-Lago Type 23 Teardrop Coupe, also by Figoni & Falaschi, won the 1938 Nice Concours d'Elegance and the Concours at Cannes, along with many other accolades. One of the most beautiful Delage's ever created was the D8-120S with the aerosport body by Letourneur & Marchand. The dramatic aerodynamic body and its large footprint made it a potential candidate for top honors. A short distance away was another Delage, a D8S Coupe with coachwork by Freestone & Webb. The use of a rear-mounted spare obviated side-mounts, revealing the beautifully swept fenders and a very long bonnet. The Duesenberg Model SJ (one of just 36 to be given the supercharger from the factory) wore open coachwork by Rollston. It sat between a 16-cylinder Cadillac and a Pierce-Arrow 'Silver Arrow.'

The car voted 'Best of Show' by the Judges was the Delahaye 135M Competition Court with coachwork by Figoni & Falaschi. The car, owned by Jim Patterson, rides on a shortened wheelbase and features enclosed front and rear fenders, curved chrome teardrop-shaped accents to highlight the flowing lines of the car, and a split rear window. It is equipped with a sliding metal sunroof, a four-speed manual gearbox, and a windshield that opens at the bottom for ventilation.

The Grand Ascent
Preceding the concours on Sunday was 'The Grand Ascent' on Friday and Saturday. The Grand Ascent is a VSCCA sanctioned hill climb exhibition in the European tradition, where drivers will pilot some of the finest vintage race cars up the historic back road to The Hotel Hershey. Modeled on similar events such as England's Goodwood Festival of Speed and paying homage to long standing events such as Mount Equinox, The Grand Ascent relived the excitement of race cars storming up hill to test the mettle of the driver and the machine.


The Hershey Hill Climb course was the old back road to The Hotel Hershey and just .7 of a mile in length. But, with a 200 foot elevation change and some serious curves it proved a challenging race course.

The Grand Ascent 'Elegance Challenge'
A new event this year was the 'Elegance Challenge.' This was a timed runners' race up the challenging Grand Ascent hill climb course. With a 7/10-mile steep uphill first leg, continuing downhill to the start line area for a total of 1-1/2 miles, it's a unique new run. Around fifty runners (myself included - even managed a third place finish) charged up the long, endless hill, followed by a very quick sprint down the hill, to the finish.

The Elegance At Hershey
The event has the location, the judges, and the cars to make them one of the top collector car events. The experience and abilities of the organizers, volunteers, donors and sponsors, have catapulted them years ahead of their infancy.
Galleries
Brass Era