Sold for $340,000 at 2016 RM Sotheby's : Hershey.
This vehicle is a 1927 Duesenberg Model Y Phaeton and is believed to be the only one created, and fitted with several engine configurations. It was an experimental vehicle that was meant to be a transitional model between the X and the J. Because it was a prototype, Augie Duesenberg was given the task of destroying the engine and chassis, but kept the body. The body was later mounted on a Duesenberg Model A chassis and gave it some non-Duesenberg wheels. The body is believed to have been built as an in-house prototype. The Model Y gave styling cues to Duesenbergs future models, especially from the cowl forward which is similar to the Model Js. The sheet metal is nearly identical to what was used in production a year later. Currently, the Model Y is powered by a straight-eight engine displacing 260 cubic-inches and offering 88 horsepower. The car has a wheelbase that measures 136 inches.
It is believed that the Model Y Sedan was delivered to Frank Morgan. Sadly, it did not survive the Classic Era.
The Phaeton was sold by Duesenberg Motors in 1932 to Fred Duesenberg's brother, August, on the condition that he destroy the prototype chassis. After moving the engine into a racing car, he did as instructed and destroyed the chassis. He installed the McFarlan body, with Leamy's prototype Model J styling, including the full bodywork, radiator, hood, fenders, steering gear, and wheel, headlamp brackets, side-mounts, and running boards, on a used Model A chassis, number 912, and sold the car in this form to an Indianapolis businessman, Hugh R. Baylor.After Mr. Baylor passed away, the Model A/Y was bequested first to his chauffeur, then to his sister, Lela Nichols, in 1941. Mrs. Nichols drove the car infrequently until 1951, when she sold it to James T. Leeson of Hattiesburg, Mississippi. Mr. Leeson proceeded to overhaul the car both mechanically and cosmetically, including rebuilding the engine, transmission, and brakes, and restoring the paint, chrome, upholstery, and top fabric. It is believed he drove the car about 6,000 miles until 1957 when it was sold to the father of its current owner.The history of this car has been well-researched over the years. Its name is often referenced as the Model Y, Model A/Y, and the Model J prototype. Prior to the 1970s, it was thought to be a Model J prototype and referred to as being either 'J-99' or 'J-100.'
By Daniel Vaughan | Dec 2016

Sold for $340,000 at 2016 RM Sotheby's : Hershey.
Fred Duesenberg and E. L. Cord put together the idea of a prototype and dubbed it the Model Y. It uses a 134 inch wheelbase chassis, aluminum body hand crafted by McFarlan and is powered by a 412 cubic inch single-over-head-cam engine with four-valves per cylinder developing 200 horsepower. The basic design would evolve into the Model J's Lycoming built DOHC 420 cubic inch engine.It was kept in service by the Duesenberg factory until 1932 when the Model Y was sold to Augie Duesenberg for the sum of $100 on the condition he destroy the chassis. Augie set the Model Y body on a model A chassis and kept the engine for his racing endeavors. Augie eventually sold the Model Y to an Indianapolis businessman who after his passing bequested it to his chauffeur and then his sister. More recently it was cherished by a single Alabama family for over sixty years who acquired it for $1500 in the early 1950's.The car today is essentially the same as when it left Augie's hands in the early 1930's.

Duesenberg Model Ys That Failed To Sell At Auction

1927 Duesenberg Model Y's that have appeared at auction but did not sell. 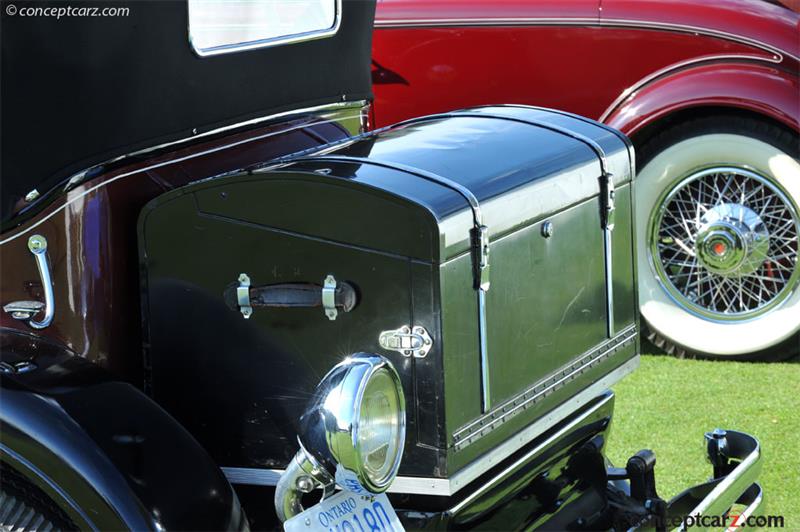