Ettore Bugatti had a vision of creating a grand touring automobile by marrying the excitement of Bugatti's racing heritage to the refinement of a road car. The result was the Type 57 designed by Jean Bugatti, son of founder Ettore. Type 57s were built from 1934 through 1940, with a total of 71 examples produced.The Type 57 Bugatti was the ultimate road car. They were fitted with some of the day's finest coachwork available, having incredibly complex and powerful power plants, and a chassis that matched well with the typical custom coachwork of the day. Considered to be the finest automobile of the day, Bugatti chassis were delivered to various coach builders.This one-off 1939 Bugatti Type 57C Roadster is powered by a 220 horsepower, 3527cc, twin overhead cam, inline, supercharged, eight-cylinder engine coupled to a Bugatti four-speed gearbox. The wheelbase is 3.3m. Suspension is semi-elliptic leaf springs; brakes are four-wheel hydraulic drums. The 'C' stands for compressor, noting the supercharger on the engine.
The coachwork by Voll & Ruhrbeck, is chassis number 57819, while the Engine number is 90c.
Chassis 57819, fitted with engine 90C, was one of the very last chassis sold before the start of World War II and the last Bugatti delivered to Germany prior to the war. Being one of the last cars produced, it benefited from all the last updates available including the effective hydraulic braking system and, of course, the twin lobe Rootes-type compressor.Close inspection of archive photos of the car from the late 30s also show a Berlin ice skating badge mounted to the front of the car and research confirms that in 1939 the 30-year-old Norwegian Olympic ice skating champion, Sonja Heine, was in possession of this 57C Roadster in Berlin. She only had the car for two years before World War II broke out across Europe, at which point, it was hidden away for safekeeping. It was not seen again until 1946 once the war had passed.The car changed hands over the next several decades and various coachwork was placed on the chassis. It was finally purchased by the current owner who, in 2002, had RM Auto Restorations reunite the original chassis with the original engine, resulting in the original vehicle as seen here.The car displayed here is a Type 57C, with a body by German coachbuilder Voll & Ruhrbeck. This one-off example is the only convertible Bugatti with coachwork by the Berlin firm.This car is known as the 'Car with the waterfall grill.' Its first driver in 1939 was the famous Olympic ice skater Sonja Henie. It was not registered to her, but was made available to her.The body and chassis were separated in the 1960s. The body was owned for more than 30 years by a German collector and the chassis and drivetrain were owned for the same period by a Swiss collector. The Patterson Collection acquired all of the parts ad restored the car to its current condition.
Bugatti was founded in Molsheim, France as a manufacturer of high performance automobiles by Italian Ettore Bugatti.
The Bugatti features a 220 horsepower, 3257cc twin overhead cam inline supercharged eight-cylinder engine. The Bugatti, chassis 57819, engine 90C, was one of the last sold prior to WWII and was delivered to Germany where it was fitted with coachwork by Voll & Ruhrbeck in Berlin, Germany's most avant-grade body builder. The 'Waterfall' grill is unique to this car and a statement of the modern times. This car when new was known to have been regularly driven by famed Olympic winning ice skater, Sonja Heine. The body and chassis were separated in the 1960's and after Herculean efforts, were reunited by the current owner.
No auction information available for this vehicle at this time. 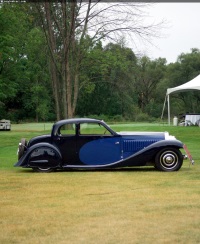 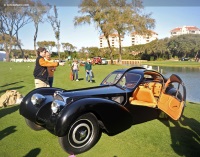