Sold for $1,430,000 at 2009 Sports & Classics of Monterey.
This Duesenberg, sold in New York in 1933, featured a beautiful convertible coupe body executed by Rollston and was powered by a supercharged SJ527 engine. The owner drove it for about a year and traded it in on a new Duesenberg, with Rollston body, but wanted the old Rollston body moved to the new (although un-supercharged) chassis. As a result, the new Rollston body was installed on the old chassis. The car changed hands several times and in 1936, was owned by publisher William Randolph Hearst. Some time later, the car was stolen and damaged. The new owner had a J401 engine and this 2406 chassis with this Murphy coachwork. The J401 engine had been removed for another project and the SJ527 engine was installed in 1939 and has remained in this configuration ever since. The supercharger was removed and replaced with a standard manifold in the 1940s, while in Balboa, Spain.

The history of this car is extensive. It has been in Cuba, Paris, and was even involved in settling a Ú.S. Navy sailor's unpaid bar tab in Madrid, Spain.

The Duesenberg J's allure fascinated enthusiasts from the model's introduction. Even in the depths of the Great Depression Duesenbergs were cherished objects of quality and style, carefully maintained, preserved and kept in running condition by dedicated owners. For good and sufficient reason it was the magnificent Duesenberg engine that inspired owners, and throughout their histories it is the engines' identities that have been most important. Even today, most Duesenberg J's are known first by their 'J-number' and only secondarily by their chassis identity. 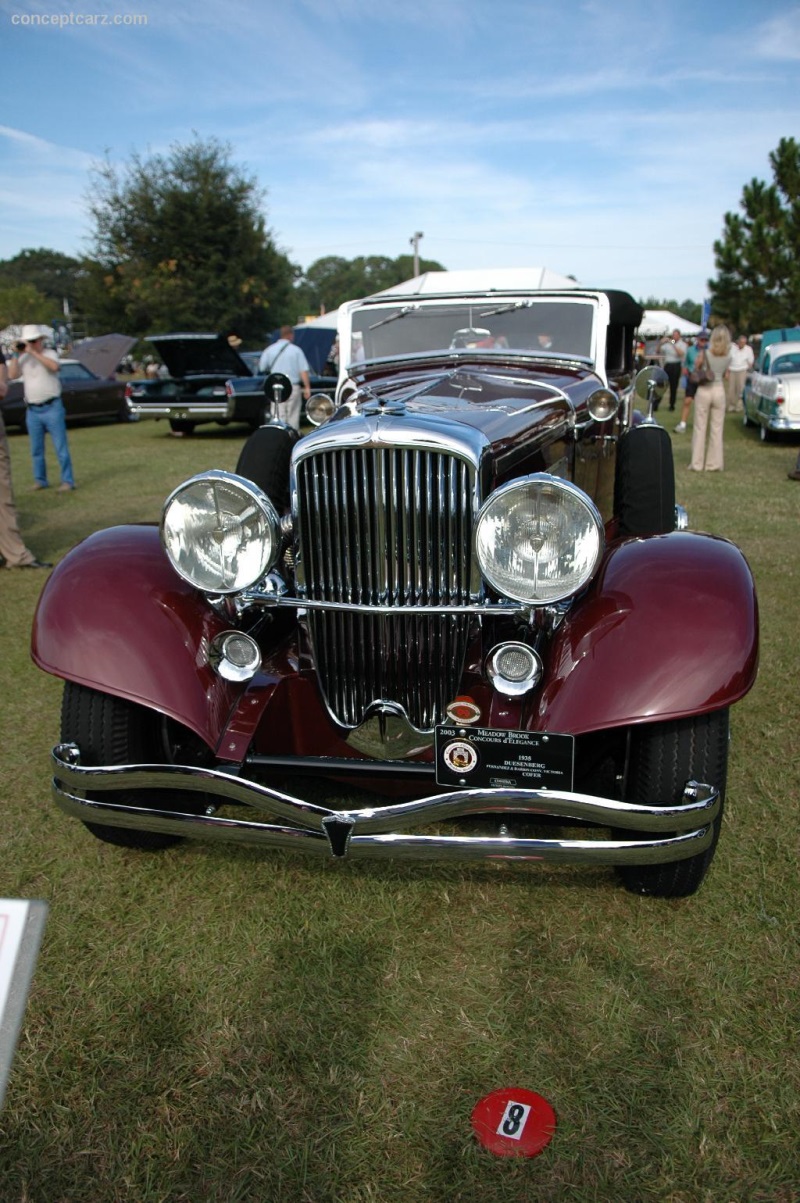 Chassis number 2406, the Duesenberg Model J Disappearing-Top Convertible Coupe offered here, is typical of the devotion that these magnificent automobiles inspired and the lengths to which owners went in the late '30s through the early '50s to keep them running. The magnificent chassis has always carried this sleek Murphy Disappearing-Top Convertible Coupe coachwork. Like many Duesenberg J's, its current engine, the factory-supercharged SJ #J527, was transplanted from another chassis (2556) in the late '30s by Shirley D. Mitchell, one of this car's early owners.

Its next owner was Norberto Angones Quintana in Cuba. Appointed first secretary of the Cuban embassy in Paris in 1939, Quintana took his Duesenberg with him, then to his next appointment at the Cuban embassy in Madrid in 1941. Several owners in Spain followed, and during this time the supercharger was removed and replaced by a standard Model J intake manifold and carburetor.

In 1976 it was acquired by Archie Meinerz and - still in Spain - was comprehensively restored. After nearly 15 years' ownership, Meinerz sold it to Canadian collector Al Webster in 1990. The car's condition was so good that little more than detailing was required, but Webster did commission a complete engine rebuild by Duesenberg specialist Brian Joseph, and upon disassembly it was verified that all the correct, and extensive, internal upgrades for the factory-supercharged SJ engine were present. The rebuild was completed with the intention that J527 would one day be supercharged again.

The next owner was famous collector Robert Gottlieb, author of many classic-car books and one of the founding members of the Classic Car Club of America. During his ownership, the Duesenberg was maintained by Randy Ema. In 1993, 2406/J527 was certified by Auburn-Cord-Duesenberg Club Level 1 with certificate D074. It was sold in 2000 to Piers MacDonald who had Stone Barn Restoration repaint it in its present Dark Garnet Red. Stone Barn also fitted new chrome wire wheels and a new top, and rebuilt the brakes. The transmission was rebuilt by Brian Joseph.

After its acquisition by the present owner in August 2003, 2406/J527 was sent to RM Restoration to prepare it for use in road events and tours. In addition to touching up any cosmetic details, the Duesenberg's mechanics received comprehensive attention to make sure everything functioned properly. The owner's charge was simple, 'Fix any little thing that wasn't right.'

Tending to one final detail - because J527 came with an important intangible - a previous owner had backed a project initiated by Brian Joseph and Leo Gephart to build a series of 10 exact reproductions of the original Duesenberg SJ superchargers in the final, high-performance 'ram's horn' manifold version using modern materials and bearings, blowers that would be better, stronger and more reliable than the original Duesenberg superchargers but visually indistinguishable, J527's intangible asset was the first place in line for one of these superchargers, which was duly acquired, installed and tuned during its freshening.Source - Gooding & Company