Sold for $825,000 at 2005 Vintage Motor Cars at Meadow Brook Hall.
Sold for $748,000 at 2010 RM Auctions - Vintage Motor Cars of Hershey.
This example, J194, was sold new by Duesenberg's New York City factory branch in August 1929 to William Durant Campbell, at which time it was finished in black with 19-inch chrome wire-spoke wheels. Within a year, on May 23, 1930, the car was resold to a banker named E.C. Converse, also of New York City, who commissioned Murphy to repaint the car in sage green with a red undercarriage.

Later, the car belonged to early Duesenberg enthusiast Bob Roberts, of Los Angeles, California, who apparently had the hood louvers replaced with side screens. According to noted marque historian Ray Wolff, it was probably during Roberts' ownership that the car's firewall was replaced with the one from chassis 2462 (ex-J449).

By 1935, the car still sported its sage green exterior finish and was being offered by the Cadillac Agency in Palo Alto, California, who sold it to an unknown Chinese businessman in San Francisco. In 1943, Robert Thelin bought the car, keeping it until 1954 before selling it to Harry Rau of Tujunga, California. In the late 1950s, the car went to Rosell Moore of Albuquerque, New Mexico and then to noted Duesenberg historian Ray Wolff of Wauwatosa, Wisconsin, who paid $400 cash plus a 1929 Cadillac Touring in partial trade and began the restoration process. 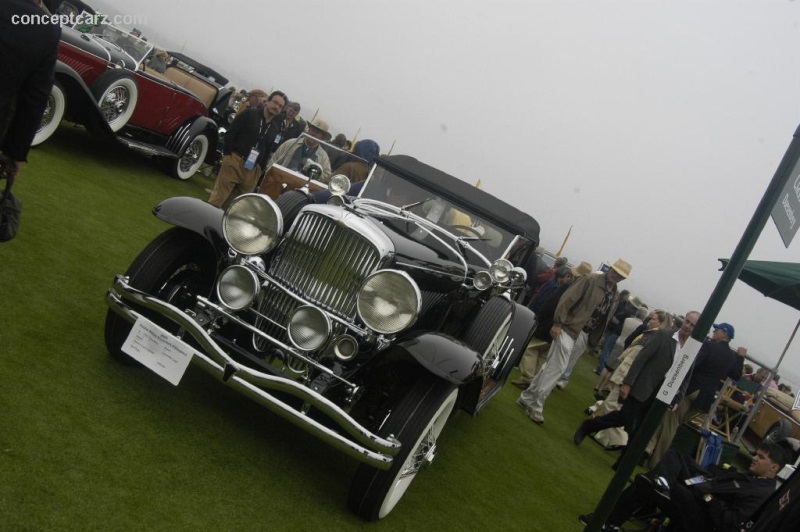 In October of 1960, Wolff sold J194 to Dr. Rufus Reitzel in Michigan for $5,350. Reitzel became another long-term owner, keeping it until he passed away in late 1974 or early 1975. His estate sold the car to Duesenberg dealer Leo Gephardt for $94,000. It passed through three other known owners before going to Courtland Dietler of Denver, Colorado in June 1977.

Dietler kept J194 for five years before selling it to David Kerr of Denver in March 1982. Kerr resold the car to noted Denver-area collector Roger Willbanks in July 1982, from whom it went to William E. Schultz of Los Angeles, California in 1984. Dick Boeshore of Lebanon, Pennsylvania bought it in 1985 and arranged for the car to be inspected by the Auburn-Cord-Duesenberg Club, after which J194 was awarded a Level 1 certification (D-010). Afterwards, Boeshore resold J194 to Texas billionaire Jerry J. Moore. The car has been in the O'Quinn Collection since 2005.

Today, J194 presents very well, having acquired a lovely patina since its earlier restoration. The silver and green paintwork is generally quite good, although some minor areas of bubbling are evident on the fenders as well as some chips to door and rumble seat edges. The chrome and brightwork are also quite presentable, although some pieces do show minor rippling and would benefit from re-plating, with a higher standard of preparatory work.

The lovely dark green leather interior is in as-new condition, although the top, probably done at the same time and trimmed in matching leather, shows minor discoloration today, and one snap has pulled through. The instrument panel is complete and correct, including the proper and rare marbled shift knob.

The engine bay detailing is older and shows some evidence of road use since restoration. It is generally quite correct, although some minor parts are of incorrect finish. Similarly, the chassis – while quite clean – shows evidence of use. Notably, J194 is fitted with both Watson Stabilators and hydraulic shock absorbers, as well as the more desirable downdraft carburetion system in place of the updraft Schebler carburetors fitted to earlier cars.

1929 Duesenberg Model J Murphy's that have appeared at auction but did not sell.