Sold for $25,300 at 2011 The Scottsdale Auction - Gooding & Company.
High bid of $11,500 at 2013 Mecum - Dan Mecum's 26th Spring Classic. (did not sell)
Sold for $55,000 at 2020 Mecum Auctions : Kissimmee.
Traditional Coachworks of Chatsworth, California, produced a limited series of wagons between 1975 and 1976 using the Fleetwood Brougham platform. The vehicle was called the Fleetwood 60 Castilian Estate Wagon and it featured a reworked Fisher body that had a forward-raked C-pillar that traveled up and over the roof. In the back, there was a sharply angled rear lift-gate with an integrated wind deflector. They were equipped with the Brougham d'Elegance trim package, carpeted footrests, pillowed seats, AM-FM radio, outside temperature gauge, and a multitude of power-operated options. Though they were elegant, offered plenty of cargo room and passenger space, and carried the Cadillac nameplate, only fifty or so of the high-style Castilians were produced. This low number may be attributed to the high price tag of $30,000 - more than three times the price of a standard Fleetwood. This example is finished in green with a white padded vinyl top, wire wheel discs, and whitewall tires. Power is from a 500 cubic-inch, overhead-valve, V8 engine developing 190 horsepower. There is a three-speed Turbo Hydra-Matic transmission, front disc brakes, and rear drums. The interior upholstered is finished in dark green ribbed velour and matching deep-pile shag carpets.
In January of 1978, the car was acquired by the J.B. Nethercutt Collection. Currently, the car has 73,000 miles on the odometer.
In 2011, the car was offered for sale at the Gooding & Company auction in Scottsdale, Arizona. It was estimated to sell for $15,000 - $20,000 and offered without reserve. As bidding came to a close, the car had been sold for the sum of $25,300 including buyer's premium.
By Daniel Vaughan | Feb 2011

Cadillac Fleetwood Sixty Castilians That Failed To Sell At Auction

1976 Cadillac Fleetwood Sixty Castilian's that have appeared at auction but did not sell. 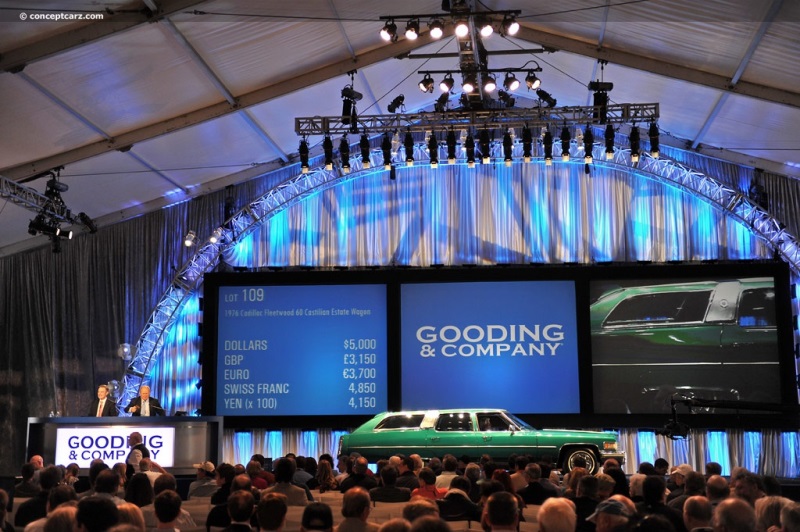