In 1936 after completing a management buy-out of his employer, Automobiles Talbot France, Anthony Lago founded the motor-racing marque, Talbot Lago. Working with his chief engineer, Walter Becchia, Lago set out to combine high-performance with beautiful coachwork, and the cars they produced exemplified that goal: they were beautiful, well-built, finely engineered and performed on the track.The Type 150C SS was Talbot Lago's top model, and while built for competition, performing admirably in the French Grand Prix at Le Mans, it may fairly be regarded even more successful as the finest exclusive touring car based on racing technology of the time. The Talbot-Lago T-150-C chassis provided a superb platform for talented coachbuilders to construct the elegant, and often flamboyant, curvaceous coupe bodies. They were streamlined, sleek, and light enough to race competitively. Joseph Figoni and Ovidio Falaschi built twelve of these tear-drop styled cars, known as Goutte d'Eau (drop of water) between 1937 and 1939. They received the nickname, 'New York Style coupes' because the first example was introduced at the New York Auto Show. Five more were built in a different notchback Teardrop style and were named 'Jeancart,' after a wealthy French patron who commissioned the first example. Historian Richard Adatto noted that it took the Figoni and Falaschi craftsman some 2,100 hours to complete a custom body. Since they were hand built, no two Teardrop coupes were exactly alike.
This berlinetta was built by Carrosserie Marcel Pourtout. The styling was handled by their top designer, Georges Paulin, who had earlier sketched a one-of-a-kind Bentley coupe for Andre Embiricos. This fastback represents yet another variation of the teardrop style. In comparison to the earlier Figoni efforts, this example has a more masculine and aggressive appearance. The car was commissioned by Monsieur Parent, a wealthy amateur racer who competed in a few regional events.
This vehicle, chassis number 90119, was stored safely in a warehouse in Marseille and was raced after the war by Domenic Sales. An American, David Leopold, saw the car in Paris, bought it and shipped it home. It went through several care takers over the years before being purchased in 2000 by the current owner.This vehicle is one of only four Pourtout-bodied 'Teardrop' Talbots that were built. It is powered by an overhead valve, hemispherical head six-cylinder engine that offers 170 horsepower. There is a four-speed Wilson Pre-selector manual gearbox and a wheelbase that measures 104-inches.
By Daniel Vaughan | Aug 2017
No auction information available for this vehicle at this time. 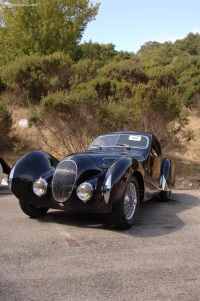