Sold for $506,000 at 2011 RM Auctions - Concours d'Elegance at St. Johns.
This Duesenberg Model J has a Boattail Speedster body created by Bob Gassoway. The vehicle, J-134, was commissioned by Denver, Colorado resident Mr. Harry G. Liebhardt late in the 1930s as a second body for his Duesenberg (chassis number J507). The original work was a Convertible Sedan with coachwork by Derham. Liebhardt commissioned the Walton Body Shop in Denver, Colorado to begin construction of a second body that could be easily mounted to his chassis. Únfortunately, the car was never completed, and the known history of the car ceases in the late 1930s until the project – with the Walton Speedster body – was acquired by Bill Harrah. This car would become the inspiration for the coachwork designed for and fitted to J134. Moreover, some of the parts from the Walton Speedster were incorporated in the coachwork now fitted to J134.

Meanwhile, another car, J134/2159 was originally delivered as a LeBaron Convertible Berline for Cord Corporation Attorney Robert Gill. Little is known about the subsequent history of Gill's convertible berline, although it is likely that it was broken up for parts in the 1940s as various components have surfaced in other Duesenberg restorations. Many of the parts were ultimately purchased by Harrah for use in other projects.

Mr. Harrah had other plans for the Duesenberg chassis and opted to store the period Walton Speedster body while he focused on creating an alternative Speedster body. He commissioned Maurice Schwartz, one of the founders of noted coachbuilder Bohman and Schwartz, to design a new speedster body in the style of the original Weymann Boattail Speedster. 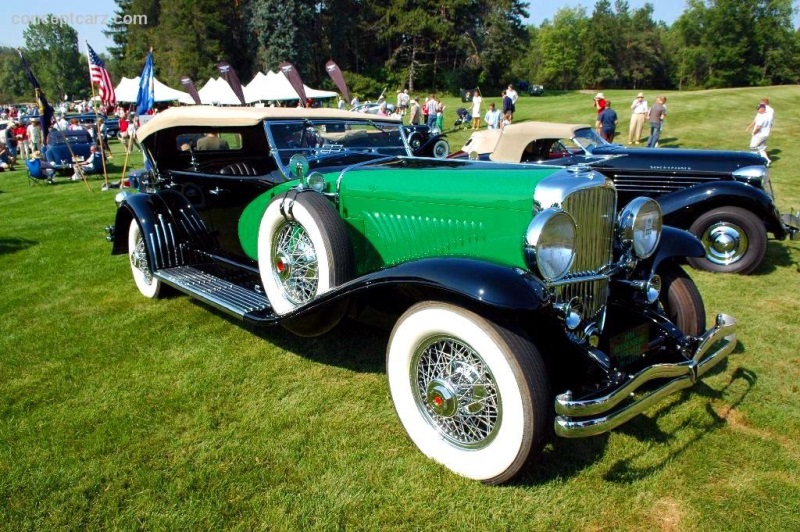 Últimately, Mr. Bill Craig, who had acquired engine J134 from Harrah, persuaded Harrah to sell him many of the original parts from J134. Craig assembled the Duesenberg using another chassis of unknown manufacture, but probably built by Frank Heiss, and fitted engine J134 along with firewall #2159. Mr. Craig owned the Duesenberg project for some time before ultimately selling the car to the late Mr. Rick Carroll of Florida.

When the J134 project was acquired by Rick Carroll, it was in need of a full restoration. No one knows today how much, if any, of the original Walton Speedster body remained with the car, but we do know that Mr. Carroll contacted noted restorer Bob Gassoway in the early 1970s to investigate the potential for restoring the car to show standards. ( posted on conceptcarz.com) Mr. Gassoway explained in a letter to a later owner, Mr. Richard Kughn, that Mr. Carroll disliked the proportions of the Walton Speedster, and therefore Carroll commissioned Mr. Gassoway to rebuild the car and improve both the craftsmanship and the lines of the car. Former Duesenberg designer Mr. Herbert Newport was brought in to design the new coachwork. It was at about this point that Mr. Carroll elected to sell the car.

Últimately, the Duesenberg was purchased by Carroll's longtime friend and noted Rolls-Royce collector Mr. Raymond Lutgert. After several meetings with Bob Gassoway, the project was again on track, only now Mr. Lutgert was to be the proud owner following the car's completion in 1977. The newly redesigned body had gone through an extensive transformation under Newport and Gassoway's guidance. The rear section of the car had been changed extensively, as had the grille and hood, which now reflected the traditional Duesenberg look. It is likely that the supercharger was fitted during the course of the restoration.Source - RM Auctions

1934 Duesenberg Model J's that have appeared at auction but did not sell.