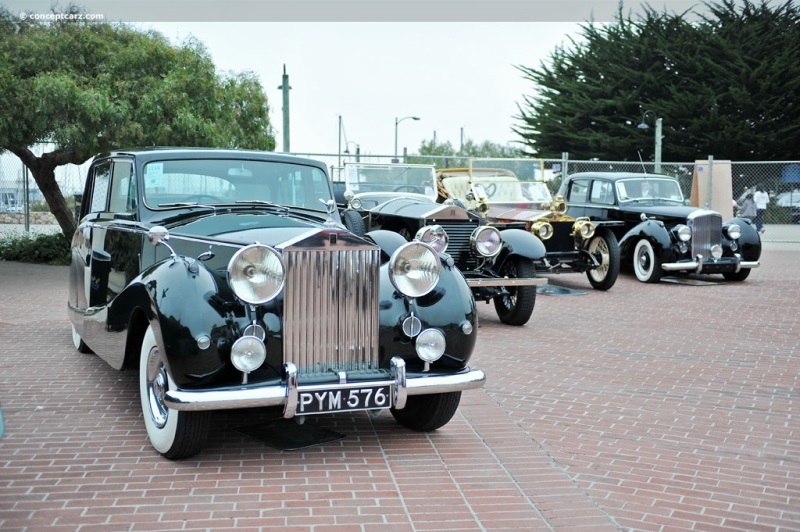 Limousine
Coachwork: Hooper
Chassis #: DLW89
Sold for $82,500 at 2011 RM Auctions at Monterey.
Prior to World War II, Rolls-Royce Ltd. began updating its namesake its companion company, Bentley. In 1938, they introduced the Wraith followed by the Mark V Bentley a year later. Both had coil-spring independent front suspensions and powered by the 4.25-liter Bentley overhead valve unit, now with cross-flow cylinder heads. When World War II came to a close, the modifications, refinements and updates to the vehicles continued. Bentley, for the first time, got a factory production body, the Mark VI Standard Steel Saloon. The engine which displaced 4257cc was reconfigured as an F-head, with overhead intake valves and exhaust valves in the block. The Rolls-Royce vehicles, continued to be built as rolling chassis and then sent to coachbuilders where they were often fitted with formal limousine bodies.The Mark VI Bentley was succeeded by the R-Type in 1952 while the Silver Wraith continued in production through 1958. During the period, the Silver Wraith's engine was twice enlarged, to 4566cc in 1951, when the wheelbase was increased by six inches. Three years later, the engine size rose to 4887cc. From 1952, the four-speed automatic transmission was offered as optional equipment.
This example, chassis number DLW89, was delivered by Hooper to a Mr. F.C. Fisher in May of 1955. The current owner acquired the car in 1975. It is powered by the 4887cc F-head six-cylinder engine which is mated to a four-speed manual transmission. The wheelbase measures 133 inches and there are four-wheel servo-assisted hydraulic drum brakes.
In 2011, the car was offered for sale at the Monterey, CA sale presented by RM Auctions. It was estimated to sell for $70,000 - $100,000 and offered without reserve. As bidding came to a close, the car was sold for the sum of $82,500 including buyer's premium.
By Daniel Vaughan | Oct 2011

1955 Rolls-Royce Silver Wraith's that have appeared at auction but did not sell.