Sold for $139,000 at 2011 Bonhams - Quail Lodge Sale.
A quarrel over a name would lead to two influential people in automotive design and production heading their own separate ways. Yet, in the midst of the disagreement there was one bond that held the two in common and that would; ultimately, take what was a disappointing situation and produce some good fruit from it. That common link was a concept drawn by Ron Hickman in 1963. Ron Hickman was the director of Lotus Engineering and he penned Colin Chapman's bid for the Ford GT40 project. The disagreement arose, not over the design concept, but over what the car would be called. Chapman obviously wanted the car to be called a Lotus, but Henry Ford II would take nothing but a car that would be called a Ford. The split would leave Ford working with Lola. Interestingly, the GT40 that would be produced with the Ford name would end up bearing great similarities to Hickman's drawings. Chapman recognized the potential in Hickman's concepts. Chapman was a man interested in becoming a formidable producer of automobiles in all classes and series of racing, and therefore, was interested in producing Hickman's concept for both street production and for Group 4 sports car racing.
Chapman's street designs included the Elite and the popular Elan. While the Elan seemed to be taking Lotus in a good direction, Chapman's philosophy of 'Simplify, then add lightness' would end up leading to Hickman's design coming to fruition.
Hickman's designs featured an incredibly sleek car with a drag coefficient that would make even modern cars envious. Known initially as the Lotus 46, the overall design would certainly be revolutionary. The car boasted a longitudinal mid-engined layout mated to a low-slung, sleek fiberglass body. The fiberglass body rested on a stiff chassis and would use the engine and drivetrain from a Renault 16. Modified from the original, the Renault 16 engine would end up producing 82 hp. The 4-speed gearbox mated to the Renault 16 engine would enable the Type 46 reach a top speed of 110 mph and could acceleration from zero to 60 in just 10 seconds. The Lotus factory knew it had a winning design. Therefore, the Type 46 would receive its new name. Sticking with the 'E' theme, the car would become known as the Europa. Not only did the Lotus factory knew they had great potential with the Europa, but its Lotus Racing team also recognized the potential hidden under the evocative and sleek fiberglass bodywork.Lotus engineers would take the new Type 46 and would begin to make some important modifications. The weak Renault engine and drivetrain would be taken out of the car, and instead, a robust and more powerful 1600cc Ford Cosworth engine, capable of producing 165 hp, would be placed inside the car. In replacement of the Renault gearbox, a Hewland FT200 with a limited slip differential would be used. These improvements, in addition to a lighter steel frame and an updated magnesium rear suspension, would all combine to make a car that would go on to win in its very first appearance at Brands Hatch. With the changes made to the car, it would become known as the 47GT and it would take 1st and 2nd in its first event in the hands of Jackie Oliver and John Miles against a field comprised of Jaguars, Cobras and Ferraris. Lotus would go on to produce between 50 and 70 examples of the 47GT which meant it was homologated in the Group 4 class. In that class, the car would just continue to win. Just during the 1967 season the car would go on to win at least eight more times. In 1968, the car would go on to win its class at Brands Hatch. It would go on to win the 2-liter class at Silverstone and would come in 2nd during the Silverstone International event. Often in John Player Gold Leaf livery, the Europa was a force to be reckoned with on the sports car scene.
One of those John Player Gold Leaf liveried Europas would become available for purchase at this year's Bonhams auction held at Quail Lodge. Chassis number 47GT10 was one of Lotus' earliest cars.
Originally, the car was sold to Nick Moor Racing in early 1967 and would be piloted by John Blades. After its racing days were over, the car would be sold and resold to a number of enthusiastic owners that would include John Harper, Jonathan Bradburn and Tony Mantle. Tony Mantle was known for his association with Climax Engine Services.The car would come up for sale again in 1995. At that time, the car would be purchased by a Lotus collector in Great Britain. Under its current owner, the car would undergo a full restoration in 2002. The entire engine was apparently rebuilt including a new billet crank, connecting rods and a new valve train. The Hewland gearbox was completely rebuilt. It was found the fiberglass body with the famous red and white Gold Leaf livery remained in good condition. Other restoration work carried out on the car consisted of restoring the black interior and strengthening the whole car with the addition of a roll bar and plating under the floor.Considered the greatest of the Europas, the successful 47GT was certainly one of Chapman's greatest creations for the sports car market, whether it was for the city streets or the race track. In recognition of its place in GT racing history, Lotus history and in the annals of sleek car design the 47GT offered for sale at this year's Bonhams auction would end up earning $139,000. Sources:
'Sale 19363: Lot No. 20: 1966 Lotus 47 GT Group 4 Competition Coupe', (http://www.bonhams.com/usa/auction/19363/lot/20/). Bonhams. http://www.bonhams.com/usa/auction/19363/lot/20/. Retrieved 16 September 2011.Wikipedia contributors, 'Lotus Europa', Wikipedia, The Free Encyclopedia, 16 September 2011, 12:57 UTC, http://en.wikipedia.org/w/index.php?title=Lotus_Europa&oldid=450799799 accessed 16 September 2011
By Jeremy McMullen

Recent Sales of the Lotus 47 Europa

Lotus 47 Europas That Failed To Sell At Auction

1966 Lotus 47 Europa's that have appeared at auction but did not sell. 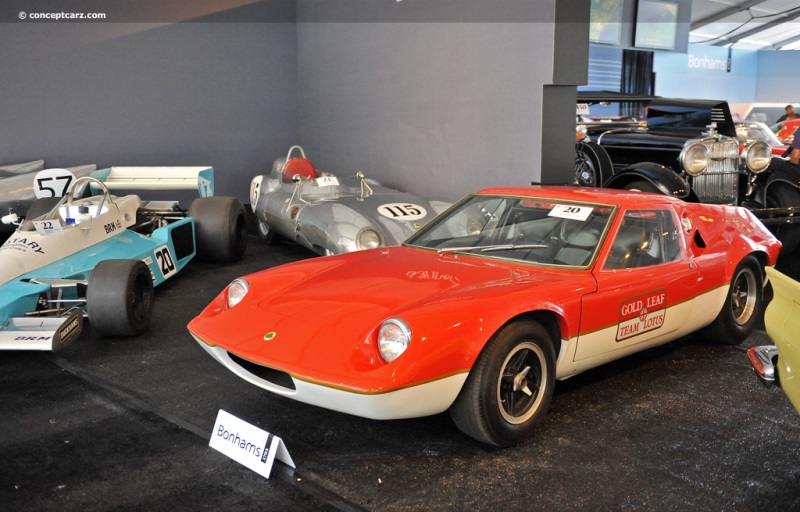