Sold for $1,540,000 at 2011 Gooding and Company - Pebble Beach Auctions.
Sold for $1,375,000 at 2013 Gooding and Company - The Scottsdale Auction.
In 1925 the Alfa Romeo 6C 1500 was introduced in Milan. These Young and Touring coach-built Alfas would help Alfa Romeo to become one of the most powerful sports car and grand prix constructors of the time. By 1928, Alfa Romeo was dominating the racing scene and would win many races, including the challenging Mille Miglia.

The 6C 1500 would lay the foundation for Alfa Romeo's rise to dominance. When the 6C 1750 would be introduced in Rome in 1929, Alfa Romeo would become thoroughly ensconced at the top of the racing scene. Evolutions of the 6C 1750 would go on to win the Mille Miglia back-to-back in 1929 and 1930. An example would also go on to score victory at the 1930 Spa 24 Hours.A lightweight sports car, the 6C 1750 Gran Sport Spider was a rather simple and straight-forward design. It offered good handling. But what made the car such a strong contender was its power. The Gran Sport Spider would include a Roots-Type Supercharger and would boost the power of the engine from around 70 bhp up to 100 bhp. The increase in horsepower meant top end speeds almost double of normal cruising speeds.

Such power and speed would make the 6C 1750 Gran Sport one of the most sought-after and longed-for chassis in racing. Combined with the beautiful tastefully simple bodywork from Zagato and the car would become desired by more than just serious racers.One of the most desired examples of the 6C 1750 Gran Sport Spiders would be part of the Gooding & Company auction in Pebble Beach in August of 2011. Chassis 10814400 would be one of the last examples ever produced. By the time this particular chassis had been produced by Alfa Romeo and Zagato the car had been refined and tweaked to its absolute limits.

Therefore, this particular example of the 6C 1750 Gran Sport Spiders represents the absolute best the car had to offer. The refinement would be particularly visible in this particular model. By the time Zagato had gotten around to building the body for this particular chassis the carrozzeria had begun to evolve and transition to newer, cleaner designs. This would be readily apparent in the Gran Sport Spider as it would end up resembling the soon to be famous 8C 2300.

A mix of the present and the future, the bodywork on 10814400 would be truly unique and quite remarkable. Underneath, the car was similar to its fellow 6C 1750 compatriots. The car would have a 1.7-liter DOHC Inline six-cylinder engine and a Roots-Type Supercharger to boost power up to 100 bhp. The car would also include a four-speed manual gearbox, a live-axle suspension with semi-elliptical leaf springs and shock absorbers and four-wheel drum brakes.

Laid over top of the old would be the new. The car would feature an 8C-style grille, a more-steeply raked windscreen and a top that fit entirely underneath the back of the car. This simple and very elegant body style would be found on only the last ten models of the 6C 1750 Gran Sport Spider to roll out of the Zagato factory. This would make these models an important connection between the 6C and the 8C, and therefore, very valuable pieces of Alfa Romeo history.
The particular model presented at auction this year would be produced in 1932 and would be certainly sold. However, tracking of automobiles prior to World War II is almost an exercise in futility. Therefore, nothing is really known of the car until it appears in the Netherlands some time before the 1950s. A photograph of the car shows it wearing Dutch registration.

Don Dixon of Texas would end up the owner of the car. Almost immediately upon taking ownership of the car, Dixon would have the car undergo restoration by the noted Chicago restorer Fran Roxas. In 1985 the work was completed. That same year, Dixon would be invited to display the car at the Pebble Beach Concours d'Elegance. In that event, the 6C 1750 would end up earning a Third in Class.
Oscar Davis would come to acquire the car the next season. The car would begin to take part in a number of rallies and other events. The craftsmanship and rarity of the car would end up earning the car great respect and a Best in Class award at the Amelia Island Concours d'Elegance in 1996.Over the next few years, the car would be bought and sold a number of times and would undergo some modifications. The finish would be changed to its present darker shade of red and the interior would be fitted with natural brown leather.Presented at this year's auction is just one of ten Zagato-bodied 6C 1750 Gran Sport Spiders that represented the future as well as the past all in one. Rare, exquisite and in many ways an original this Alfa Romeo 6C 1750 would end up earning $1,540,000 at auction.Sources:
'Lot No. 110: 1932 Alfa Romeo 6C 1750 Series V Gran Sport', (http://www.goodingco.com/car/1932-alfa-romeo-6c-1750-series-v-gran-sport-1). Gooding & Company. http://www.goodingco.com/car/1932-alfa-romeo-6c-1750-series-v-gran-sport-1. Retrieved 23 August 2011.Wikipedia contributors, 'Alfa Romeo 6C', Wikipedia, The Free Encyclopedia, 9 July 2011, 10:58 UTC, http://en.wikipedia.org/w/index.php?title=Alfa_Romeo_6C&oldid=438560060 accessed 23 August 2011'Alfa Romeo 6C 1750', (http://www.alfaworkshop.co.uk/alfa-romeo-6c-1750.shtml). Alfa Workshop: Run by Enthusiasts for Enthusiasts. http://www.alfaworkshop.co.uk/alfa-romeo-6c-1750.shtml. Retrieved 23 August 2011.
'Alfa Romeo 6C 1750 Grand Sport Spyder by Zagato, 1930', (http://www.museostradale.com/stmichaels/alfa_6c1750_gszagato_1930.htm). Museo Stradale. http://www.museostradale.com/stmichaels/alfa_6c1750_gszagato_1930.htm. Retrieved 23 August 2011.
By Jeremy McMullen 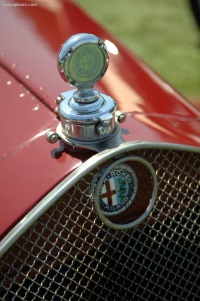