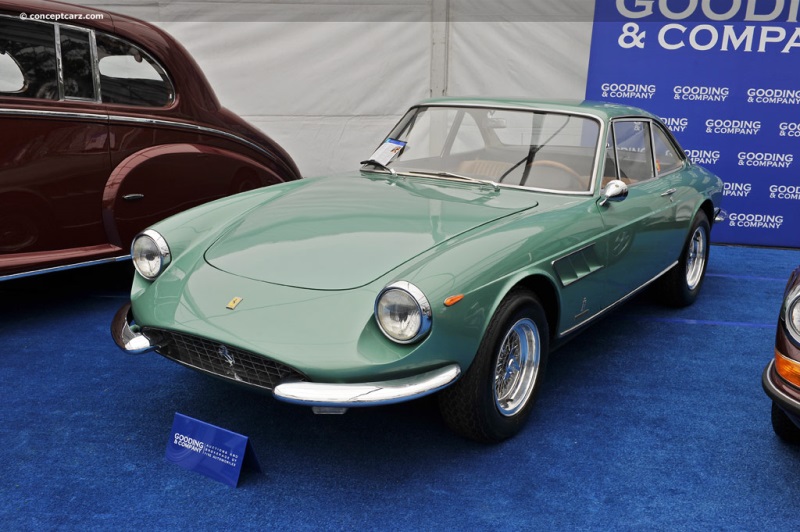 Coupe
Coachwork: Pininfarina
Chassis #: 09867
Engine #: 09867
Sold for $275,000 at 2011 Gooding and Company - Pebble Beach Auctions.
This Ferrari 330 GTC was built during the Spring of 1967 and left the Pininfarina workshop in Torino finished in the color scheme of Verde Medio with beige leather upholstery. It left the factory fitted with air-conditioning, power windows, instruments in kilometers and alloy Campagnolo wheels. It was delivered to the Swiss Ferrari importer SAVAF in May of 1967 and it remained in the country throughout its earliest years.In 1970, it was exported to the United States and sold to Thomas J. gamble of Woodland Hills, California. In 1979, the GTC moved to Northern California where it came into the care of Harold Robinson, a resident of Berkley. It was later sold to George Neuwald, a resident living in Aptos. By 1985, the Ferrari was in the care of Dennis Krieg, who offered it for sale in the Ferrari Market Letter. At the time, it was reported to have 96,000 original miles.
The car remained in Northern California through the late-1990s, by which time a subsequent owner had reportedly completed an engine top-end and suspension rebuild by a Ferrari specialist. It was in Virginia Beach for a brief period in 2003 before moving to Idaho where it has since resided in a collection of sports cars.
Some point in the vehicles history it was given a re-paint in the original color. The interior is largely original although the seats have been dyed to maintain their attractive patina. The car rides on its Borrani wire wheels and retains the original Campagnolo spare wheel in the truck. There is an original leather pouch, tools, a jack and various handbooks. In 2011, the car was offered for sale at the Gooding & Company auction held in Pebble Beach, California. It was estimated to sell for $250,000 - $325,000. As bidding came to a close, the car had been sold for the sum of $275,000 inclusive of buyer's premium.
By Daniel Vaughan | Nov 2011

1967 Ferrari 330 GTC's that have appeared at auction but did not sell.