Sold for $451,000 at 2011 Gooding and Company - Pebble Beach Auctions.
Sold for $550,000 at 2015 Gooding & Company - Arizona.
Ever since its founding in 1906, Rolls-Royce has always sought after the highest standards of elegance and luxury. The Silver Cloud would have to be considered its standard-bearer and the image of the brand during the 1950s.Utilizing the steel body shell manufactured by the Pressed Steel Company, the Silver Cloud line of automobile was very rigid, and yet, very simple in its design. This elegant simplicity would be at the heart of the replacement for the Silver Dawn.Weighing in at nearly two tones and powered by a 4.9-liter six-cylinder engine producing 155hp, the car was by no means a sportscar, but it had the performance to combine neatly with the supple luxury. Yes, the car could reach a top speed of just over 100mph, but the car wasn't about that. It was about the experience of a journey immersed in opulent comfort.
The Silver Cloud I would begin production in 1955 and would continue through 1958. In total, 2,238 examples would be built in various guises. One of the rarest of all body designs built over the course of the production run would be number 7410, the Drophead Coupe.
In all, just eleven examples of the Drophead Coupe would be built for the Silver Cloud I chassis. What would make this example so rare was the fact it would come with left-hand drive and with an aluminum body instead of the steel. Chassis LSFE 451 would be one of those chassis that would bear upon itself one of the eleven designs. The chassis would be even more extraordinary. Between 1955 and 1965 just about 200 examples would feature coachbuilt bodies. This would be one of them. Produced by H.J. Mulliner, design 7410 was considered one of the prime designs of the time.This car was actually part of a pair ordered by music publishers, Chappell & Co. They were presented as gifts to Broadway composers Lerner and Loewe, who would be remembered for the score for My Fair Lady, Brigadoon, Paint Your Wagon, Gigi, Camelot and a number of others. Loewe would retire and would move to California in the early 1970s, coming with him would be LSFE 451.In 1977, after some twenty years, Loewe would sell the Drophead Coupe to its second owner. Some time later, the car would change hands again, ending up in the hands of Jim Toole. Toole was a Rolls-Royce and Bentley enthusiast extraordinaire. Detailed and determined, Toole would take to restoring the car by himself.Proving his talent and eye for detail, Toole would present the Rolls-Royce at a number of events and would often come away victorious. In 1983, the car would achieve the H.J. Mulliner Park Ward Trophy at the Rolls-Royce Owners' Club meeting in San Diego. Then, in 1991, the car would receive a First Place Senior Trophy at the Monterey National Meet. That same year, and at the very same event, the car would achieve the Guerrero Award given for Best Personal Restoration. The timeless elegance of the car, and its numerous awards, would lead to the car being featured in a numerous forms of literature. The car could be found in Lawrence Dalton's effort Rolls-Royce: The Elegance Continues, as well as, in The Flying Lady.
Purchased from Toole, the new owner has maintained the car's form and look. Detailed, still bearing three pieces of original monogrammed luggage, its Continental Touring Kit and coming complete with original build sheets and historical file, the 1958 Silver Cloud I Drophead Coupe remains drop-dead gorgeous.
Offered as part of Gooding & Company's 2015 Arizona auction, the Drophead Coupe would draw initial estimates ranging from between $500,000 and $700,000. The final sale price would be $550,000.By Jeremy McMullen

Sold for $451,000 at 2011 Gooding and Company - Pebble Beach Auctions.
Sold for $550,000 at 2015 Gooding & Company - Arizona.
The Rolls-Royce Silver Cloud was produced in a wide variety of styles throughout its decade-long production run, though only a handful were the H.J. Mulliner Drop Head Coupe with design number 7410. H.J. Mulliner modified and adapted the Drop Heads from standard, steel saloons. The bodies were designed from a clean sheet and individually constructed in aluminum. They were fitted with cathedral taillights and luxurious appointments.It is believed that less than twenty-five examples of the drophead coupe were built, of which 11 were originally specified in the left-hand drive configuration.This example, chassis number LSFE 451, is a left-hand drive example that was delivered to its first owner, Lillie Hall, in November of 1957. It was finished in Black Pearl with scarlet Connolly hides and a black convertible top. It was registered UGU 935 and sent to Ferryfield Airport on June 21st of 1958, fully outfitted with power-assisted steering, door-lock weather shields, Dunlop whitewall tires, a Continental spares kit and a radio, as well as an RAC badge and a 'Made in England' plate.
Upon its arrival in the United States, this Rolls-Royce was delivered to the RKO Building in Rockefeller Center for Chappell & Co. Inc., the famed music publishing company. A short time later it was presented to musical theater composer Frederick Loewe in appreciation of his award-winning work on My Fair Lady.
Ownership later passed to Joseph V. Nash. In 1977, a short time after Mr. Nash purchased the vehicle, it was offered for sale in The Flying Lady where it was described as having 59,000 miles.Jim Toole of Los Angeles purchased it in 1979. The car was treated to a ground-up restoration that began in 1980. When the work was completed, the vehicle won more than 60 first place awards at various concours and club meets. In 2011, the car was offered for sale at the Gooding & Company auction held in Pebble Beach, California. It was estimated to sell for $400,000 - $550,000. As bidding came to a close, the car had been sold for the sum of $451,000 inclusive of buyer's premium.
By Daniel Vaughan | Nov 2011

1958 Rolls-Royce Silver Cloud I's that have appeared at auction but did not sell. 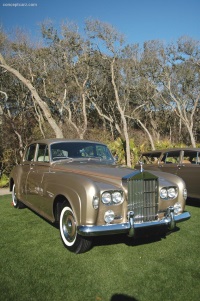