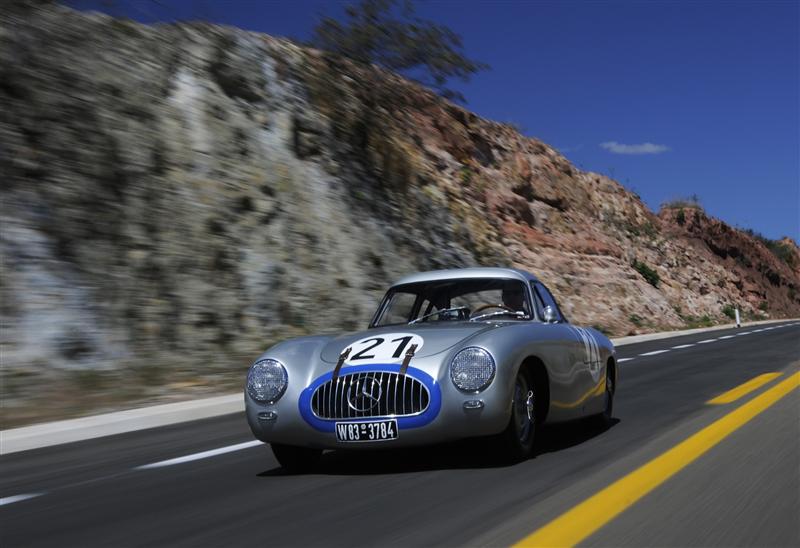 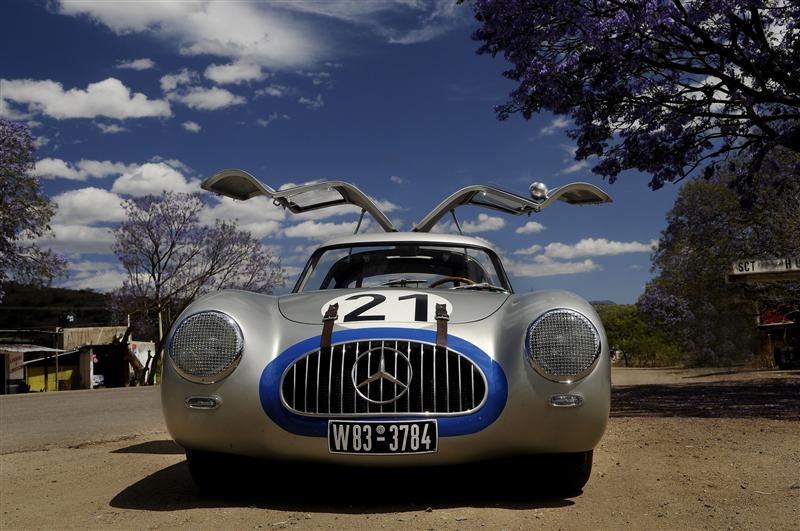 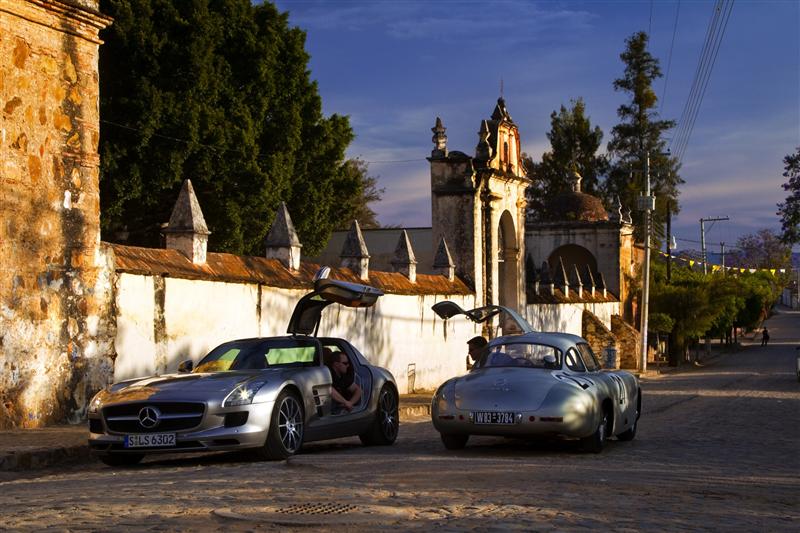 • Visible traces of a long and thrilling vehicle life 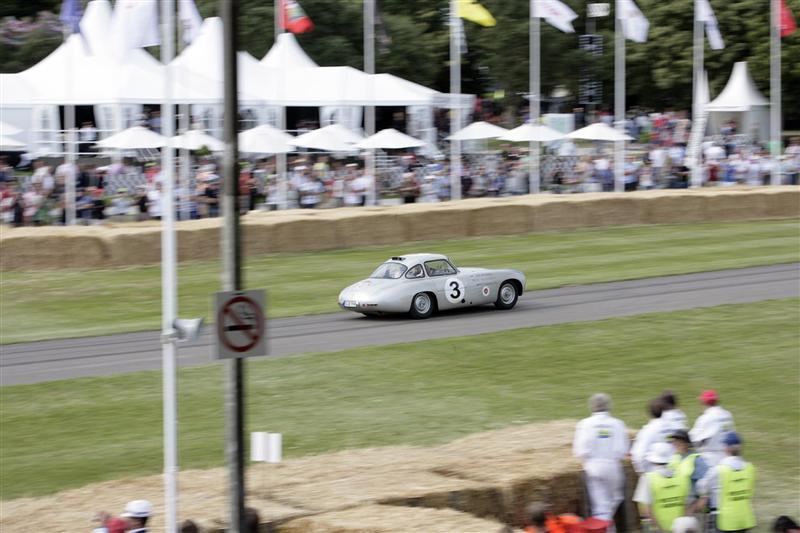 Stuttgart – The origins of the SL class are rooted in motor racing: in the early 1950s, Mercedes-Benz developed the 300 SL racing car (model series W 194). This, the grandfather of all SLs, undertook its initial test drives in November 1951 on the Solitude circuit just outside Stuttgart, as well as on the Nürburgring and the Hockenheimring. The vehicle was introduced to an awestruck press on 12 March 1952, on the autobahn between Stuttgart and Heilbronn.

The 1952 racing season was to prove an exceptionally successful one for Mercedes-Benz, as a look at the results of the 300 SL's various appearances reveals: second and fourth places in the Mille Miglia, a threefold victory in the 'Prix de Berne' sports car race, double victory in the 24 Hours of Le Mans, fourfold victory in the Nürburgring Anniversary Sports Car Grand Prix and a double victory in the 3rd Carrera Panamericana in Mexico. The brand had made its return to motor racing with a true flourish, while the continuing advertising impact ensured it was firmly back on the international scene.

Restoration of the 300 SL with chassis number 2

The first 300 SL no long exists, having been scrapped during its time with the company. However, the second car to be built, with the chassis number 194 010 00002/52, is still with us and has been in company ownership since it was built in the racing workshops in 1951/52. This oldest existing SL has now been painstakingly restored to mark the anniversary of '60 years of the SL', which will be celebrated in 2012. This involved the vehicle being completely dismantled at the Mercedes-Benz Classic Centre in Fellbach, near Stuttgart, then every single component meticulously examined and, where necessary, restored according to the very highest standards of authenticity and quality. The clear remit was to retain the substance in every respect. The second 300 SL (W 194) ever to be built is now therefore revealed in new splendour – yet continues to bear with pride the traces of its long and thrilling life.

The restoration of the bodywork was a particularly tricky process, as it is made out of extremely fine aluminium/magnesium sheet metal which, by its very nature, is extremely delicate. Time had also taken its toll on it in many places. It took the specialists around six months to bring the body shell of the oldest SL in the world still in existence back to its former glory. The restoration of the vehicle lasted ten months in all, which, in view of the extensive work involved, represented a very tight schedule.

All the effort was well worthwhile, though. When the engine of the Mercedes-Benz 300 SL, which bears the original registration plate 'W59-4029', is started up once again and the vehicle quickly picks up speed, it is easy to believe that it can still manage a top speed of 230 km/h and that this is the car that enjoyed one of the most successful sports careers of the 1950s.

The first motor racing vehicle to be produced by Mercedes-Benz after the end of the Second World War appeared at a time when Europe still lay in ruins. On 15 June 1951 the Board of Management resolved to participate in motor racing once again from the 1952 season and commissioned the production of the '300 SL Super-Light', as the new car was initially known. The suffix was later shortened to the simple letters SL – so giving rise to the model designation 300 SL. Its M 194 engine was derived from the engine used in the Mercedes-Benz 300 prestige saloon, also known as the 'Adenauer Mercedes'. For its use in the racing car, the engineers increased the output to around 170 hp (125 kW). The racing engine, equipped with dry sump lubrication, is canted at an angle of 50 degrees to the left.

The body of this first SL preempts certain elements of the later series-production sports car model. Among these are the low bonnet of the pre-war racing cars, with a Mercedes star mounted on the grille of the cooling air intake. The famous swing-wing doors are a characteristic feature of the Coupé: they are cut deep into the roof, open upwards and were originally conceived purely as access hatches that opened only as far as the beltline. During preparations for the '24 Hours of Le Mans' the door openings were enlarged, giving the even more pronounced effect of extended wings. This led to the car being nicknamed the 'Gullwing' by the Americans and 'Papillon' (Butterfly) by the French. In two races the 300 SL appeared with a Roadster body rather than as a 'Gullwing' model.

Lightweight construction was one of the key priorities for the 300 SL. Wherever possible, efforts were made to save weight - the body shell is made out of sheet aluminium/magnesium, some of the mechanical components of aluminium or magnesium, while various parts are bored to make them lighter. Another way of improving competitiveness was to make the body as aerodynamic as possible. Rudolf Úhlenhaut, who was the head of passenger car testing at Daimler-Benz at that time, developed a special framework for the W 194, weighing just 50 kilograms. This is made out of very fine, high-alloy steel tubes designed to absorb tensile and compression forces.

The interior is panelled throughout and, unusually for a racing car, exudes an air of comfort. Speedometer and rev counter are perfectly positioned in the driver's field of vision, with the smaller instruments for water temperature, petrol pressure, oil temperature and oil pressure, as well as the car's original stopwatch, located below them. The well-contoured, bucket-type seats are upholstered in tartan woollen cloth, while the four-spoke steering wheel can be removed to make getting in and out of the car easier.

A total of ten W 194 vehicles were built for the 1952 season. A successor model was also developed in readiness for the following year which, as the eleventh SL to be built, is also known as the W 194/11. It never did race in the 1953 season, however. From 1954 onwards Mercedes-Benz competed in Formula 1 racing, while the W 194 was developed further to become the 300 SL series-production sports car (W 198). The series-production vehicle became the dream sports car of the 1950s, going on to be awarded the accolade of 'Sports car of the century' in 1999.

This Mercedes-Benz W194 (chassis 2) is one of two vehicles that share a special place in the history of the 300 SL Gullwing. W194 chassis 1 and 2 were hand-built in Rudolf Uhlenhaut's Stuttgart-Unterturkheim racing workshop. Uhlenhaut was at that time Head of Passenger Car Research at Daimler-Benz. The special hand-built character of chassis 2 is visible in many of its components, such as the welding seams. The entire body is formed of an aluminum-magnesium sheet metal and is very light. This car has remained with Mercedes-Benz and has been restored by Mercedes-Benz Classic to celebrate the 60th anniversary of the 300 SL.
No auction information available for this vehicle at this time.