Sold for $198,000 at 2007 Barrett-Jackson - Scottsdale 2007.
Sold for $118,250 at 2012 RM-Automobiles of Arizona.
Carroll Shelby was just following an earlier successful formula when he joined the AC Car's chassis with a big throaty V-8 engine. He certainly out to have known it worked as he had driven the prototype back during the 1950s—the Allard. Before World War II, Sydney Allard built specially designed cars to compete in trial events. These cars, powered by American V-8 engines, would be used to great effect because of their high torque engines. This would set the stage for the motor company when the world war came to an end in 1945. After the war, Allard saw a burgeoning market in the United States, especially since that was where his V-8 engines came from in the first place. Having much more common mechanicals underneath the English-designed body would prove to be quite successful in the United States and around the world as an Allard would finish 3rd overall in the 1950 24 Hours of Le Mans and would take the victory in the 1952 Monte Carlo Rally.
Allard's immediate postwar designs would come in basically three models that had single-letter identifiers. The 'J' was strictly a competition sports car. The 'K' was slightly larger and was intended mostly for road use. And the 'L' came with four seats and was certainly just meant for the road. At the 2012 RM Auction in Arizona one of Allard's 1952 K2s would be made available for sale.
While the K1 would be designed and developed for road use, the K2, which would follow the K1 in 1950, would be developed for both the road and the track. Only 119 of the K2 models would be made and the one available for sale at the RM Auction in January would be a ‘Factory Special', or, ‘Special Production' model of the K2 as it would be the display car at the 1952 New York Auto Show. Already something of an absolute terror on both the road and the track, this fully enveloped K2 Allard would come with Borrani wire wheels and a Cadillac V-8 engine originally, but all of that would change once it was sold to its first owner. After being delivered in March of 1952 to R.P. Imported Motor Co. of New York it would be sold to J. Dany, also of New York. Some time during Dany's ownership the car would undergo replacement of the Cadillac V-8 engine. Around 1957, the car would have a 392 cu. in. Chrysler 'Hemi' engine placed inside. This would give the car incredible power, but it was hardly finished from being increased in its power output. In 1960, the car would be sold. The car would travel from New York and would end up in Missouri as the property of D. W. Ememon. Ememon would own the car until 1966 and would end up selling it and shipping it across the Pacific Ocean to Australia. In Australia the car would be the property of J. Kimneint of Freemantle. The car would remain with Kimneint for about twenty-three years. Then, in 1989, the car would be sold and shipped back to the United States. It would make its way to California and to Kerry Horan. Horan would receive a car that had travelled more miles during its life being sold than it actually travelled under its own power. However, the many years had taken their toll and the car needed a complete restoration. UK specialists, including Ron Jenkins of RaceSport International would be involved in a concours-level restoration of the Allard. Rod Jolley would take care of the restoration of the body. Jolley's hard work would enable the car to retain almost all of the original alloy body panels with the exception of the rear deck lid. Unfortunately the steel floor had corroded, but a new steel one would be fabricated to replace it. Even the finish of the car would be completed by another well-known restorer. Kevin O'Rouke, a UK restorer of Moto Technique Ltd. would have the honor of applying the new exterior finish and making the Allard come alive. Coming alive would be exactly what the car would need after having been in competitive FIA-legal vintage races. The engine, the original 392 cu. in. Hemi V-8 had been bored to 396 cu. in. and produced an estimated 600 bhp. This, and the regular wear and tear of consistent vintage racing, put a lot of stress upon this aged chassis, and especially, its suspension components. Already having a reputation for cracking and failing, the uprights to the suspension would be removed and replaced by new parts fabricated brand new from billet material. New axle shafts would be fabricated as well, along with machined Jaguar rear-axle hubs. Of course, with 600 bhp braking power would be of utmost importance and the Allard would be fitted with Buick drum brakes that were much larger than the original ones.

Having received its FIA Historic Vehicle Identity papers in 1994, this Allard has become a popular entry in historic races and achieved a number of victories all over the world including the United States, Europe and the United Kingdom.
The car's most recent history includes an invitation to take part in the Goodwood Revival Meeting. It also includes numerous awards for its restoration. The car would gather the VSCC Concours d'Etat Trophy. It would also earn the Best Race Car award at Lime Rock. Finally, the car would achieve the honor of being the Best Vintage Sports Car at Mid-Ohio. This car's competitive history, and its numerous awards for its restoration and reflection of Allard, would lead to the car setting a public record for sale price for a K2, which it set back in 2007.
Stocked full of spares parts including original Halibrand 'kidney bean' wheels, brake shoes and numerous other items, this Allard is certainly still not ready for a life just sitting around as part of some collection. In the case of this particular chassis, there is certainly racing blood flowing through its veins. Complete with numerous documentation, correspondence, owners history and other papers, this 1952 Allard K2 ‘Factory Special' not only provides very interesting reading to help imagine the era when the Allard was a fierce competitor in the ranks of endurance racing. But, it still provides the graphic, full representation bringing the imagined to life as it is still more than at home racing around motor circuits.
Armed with such history in the company itself, its world-wide racing experience and an award winning restoration chassis 91K3019 would be expected to garner between $175,000 and $210,000 at auction.Sources:
'Feature Lots: Lot No. 220: 1952 Allard K2 ‘Factory Special' Roadster', (http://www.rmauctions.com/FeatureCars.cfm?SaleCode=AZ12&CarID=r174&fc=0). RM Auction. http://www.rmauctions.com/FeatureCars.cfm?SaleCode=AZ12&CarID=r174&fc=0. Retrieved 7 January 2012.Wikipedia contributors, 'Allard', Wikipedia, The Free Encyclopedia, 1 January 2012, 16:05 UTC, http://en.wikipedia.org/w/index.php?title=Allard&oldid=468950649 accessed 7 January 2012
By Jeremy McMullen

1952 Allard K2's that have appeared at auction but did not sell. 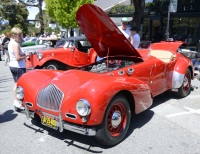 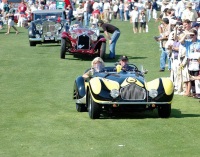