The French based company, Tracta, produced automobiles from 1926 through 1934. Production was initially low and they were pioneers of front-wheel drive vehicles. The early cars were manufactured in Versailles but Gregoire soon moved to a small factory in Asnieres. Production continued through 1934, but the company was not making money so the decision was made to cease production. In 1926, Jean Albert Gregorie and his partner, Pierre Fenaille invented the constant velocity (CV) joint, under the name Tracta. The Tracta CV joint was very durable and easily manufactured. Up until this time, front-wheel drive cars were mostly prototypes, built in small quantities and used mostly for competition. Proponents of the new design included Christie, Gregory & Mill in the United States and Alvis and Bucciali in Europe.This four-cylinder race car is one of two made in 1929, and is the sole survivor. It was Gregorie's personal racecar; he designed it, built it and piloted it. The Tracta raced at Le Mans in 1929 and 1930 and was piloted by Valon and designer Jean Albert Gregoire. It won its class (one-liter class) and seventh overall in 1929. After LeMans, the car continued its racing career all over Europe, including at Francochamps in Belgium and at San Sebastion in Spain.
It was powered by a 45 horsepower engine, but capable of running 90 miles per hour. The four-speed gearbox features an overdrive especially designed for the Le Mans racetrack. It is, of course, front wheel drive.
Excluding paint and tires, the car is entirely original. The trunk and spare wheel were mandatory for racing at LeMans during this time. All caps (gas, oil, water) are mounted with a big washer with many holes. After adding fluid in the pit, the caps were sealed and the seal could not be broken without the Commissaire supervising the operation.Racing
The first organized speed race took place in France in 1895: a round-trip distance race from Paris to Bordeaux. The winner's speed averaged just under 25 miles per hour, with most of the vehicles powered by gasoline, but others propelled by steam or electricity. The French dominated the early years of automobile racing. The description Grand Prix was first used in 1901 for a race at Pau, France, and soon became popular throughout Europe and the United States. Around 1905, the first endurance race was held.The Le Mans contest was and is a continuous endurance race lasting 24 hours. Initiated in 1923 by the Automobile Club de L'Ouest as the Grand Prix d'Endurance de 24 Heures, Coupe Rudge-Whitworth, the race is held on closed public roads in and around Le Mans, an historic city in the Loire valley southeast of Paris. It soon became known as the 24 Heures du Mans. The course, called the Circuit de la Sarthe, was originally nearly eleven miles, and is now about eight and a half. During this early period, each car was normally driven by a team of two. The British maker Bentley dominated the event between 1924 and 1930, winning five races, including that of 1929, in which the Tracta A raced. Cars now reached higher speeds: by the end of the decade the average speed of Le Mans' 1929 winning drivers Sir Henry Birkin and Woolf Barnato was over 73 miles per hour, covering 1767 miles. With its focus on endurance and distance rather than pure speed during a short run, Le Mans influenced automobile design for safety, reliability, and efficiency.

Vehicles
No auction information available for this vehicle at this time.

Recent Sales of the Tracta Model A

Tracta Model As That Failed To Sell At Auction

1929 Tracta Model A's that have appeared at auction but did not sell. 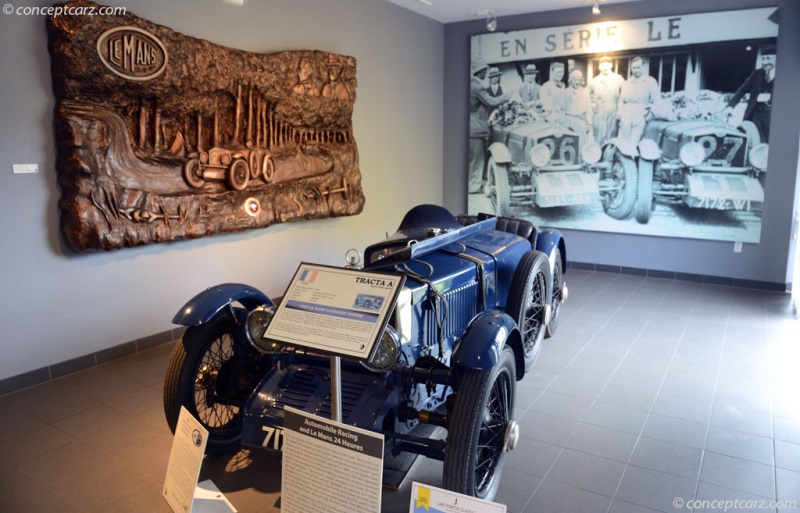