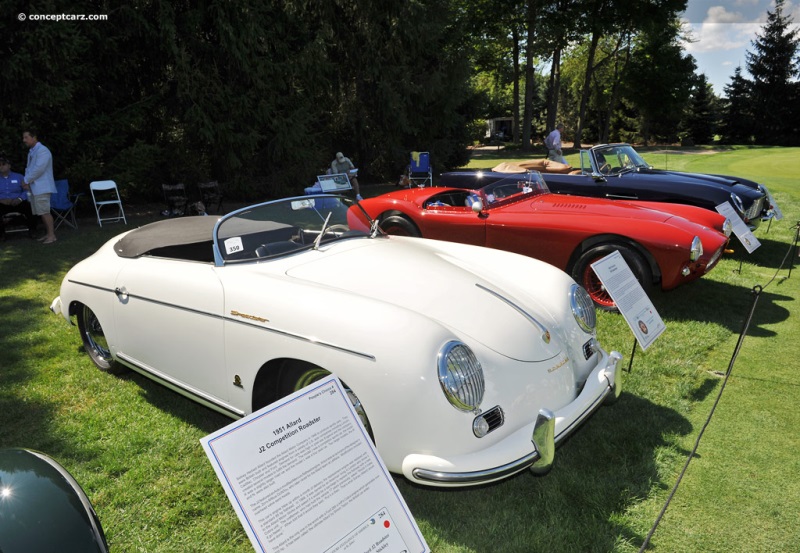 Roadster
Coachwork: Reutter Karosserie
Porsche's recovery following World War II was built upon low cost, available components from the Volkswagen 'Beetle' that Dr. Ferdinand Porsche had designed pre-war. His son, Dr. Ferry Porsche, grew the family business into increasing production when the performance of the post-war 356 won races and became popular. The 356 designation was the factory type number for a Volkswagen based sports/touring car that Dr. Ferry Porsche brought into production during 1948 in Gmund, Austria where about 50 cars were built until the factory was relocated during 1950 to Zuffenhausen, Germany where it remains today.Full production of steel bodied 356 Porsches, versus hand-formed aluminum bodies of the Gmund cars, began that year. By year's end, 289 were sold. The largest market was the USA, and the country's sole importer, Max Hoffmann in New York, ordered special cabriolet roadsters that became known as the 'American lightweight.'Porsche offered a range of engines by then, and sixteen of the cars were built, fourteen arriving in the United States. They became so successful in competition that a new model, the 'Speedster' was introduced in September, 1954 as a sporting, stripped down roadster available only in the US. Its low, rakish windshield could be easily removed for weekend racing. Production of 356 models continued until April, 1965, and rather than introduce new models yearly, Porsche continually refined the line to include a host of variations. Refinements ultimately resulted in a new designation, the 356A introduced during 1955. Between 1948 and 1955, 7,627 356 Porsches were built, all of them characterized by split windshields.
No auction information available for this vehicle at this time.