Francis Penn Curzon, the 5th Earl Howe, was far from an average racing driver. Prior to discovering racing, Howe had a distinguished career serving the people of Britain, including being a member of the Royal Navy and being elected to a seat on the British Parliament.His list of achievements in the world of racing is equally as impressive, with notable accomplishments including co-founding the British Racing Drivers' Club, competing in the 24 Hours of Le Mans no less than six times between 1929 and 1935 and winning the event twice.Though he had many vehicles, one of Howe's most impressive automobiles was his 1929 Mercedes-Benz 680 S, fitted with bespoke boattail coachwork by Barker. Originally engineered for racing, the qualities that made the S-Type successful on the circuit also made it an excellent candidate for road use. Taking note of his S-Type's wide range of capabilities, Earl Howe not only used his car for touring across Continental Europe but also regularly competed in Hillclimbs, Speed Trials, and other forms of competition.
Howe was a regular Le Mans entrant between 1929 and 1935, winning it in an Alfa Romeo in 1931. The Mercedes-Benz SS was a perfect fast road car for someone with such a sporting lifestyle, and Howe was well known for having one of 'Europe's most elaborate' collection of racing cars. This car still retains its original Marchal lighting equipment and chrome-plated wheels that are complemented by the low-cut doors and the unusual torpedo-style running boards containing tools and other ancillary equipment.
This car was delivered to Mercedes-Benz of London as a Model S before being uprated to full SS specifications, with a 7-liter supercharged engine, and fitted with lightweight tourer coachwork by Barker of London. After a careful restoration to original specifications, the car is presented exactly as it was when originally delivered to Earl Howe. This car still retains its original Marchal lighting equipment and chrome-plated wheels, and these are complemented by low-cut door sand unusual torpedo-style running boards containing tools and other ancillary equipment.
No auction information available for this vehicle at this time.

1929 Mercedes-Benz Model SS's that have appeared at auction but did not sell. 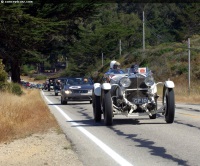