Sold for $19,550 at 2013 Bonhams - The Scottsdale Auction.
Bitter arguments have a way of destroying good things, just ask Ransom Eli Olds. After an argument with his principal investor and his sons, Olds would lose the company bearing his own name. Having lost the use of his own name, Olds would be forced to start over using an assumed name. Thankfully for him, the use of his initials had not become prohibited. Therefore, the REO Company would be born.REO would come to manufacture automobiles and trucks onwards from 1905. The company would do well initially, but then would face fierce competition from the likes of Ford and General Motors. The company would carry on, however.Olds would retire and would hand the controls of the company over to Richard Scott. This wouldn't be the opportunity it seemed when the Depression struck toward the later-part of the 1920s.
Despite Scott's best efforts, the company would be struggling dearly and it would lead to Olds coming out of retirement in an attempt to help stem the tide. However, by 1936, the damage would be done. The efforts would not be enough to turn things around and the REO Company would cease all production.
During the early days of the REO Company, however, the company would offer single and twin-cylinder Runabouts. One of those the company offered would be the twin-cylinder Model B.The Model B certainly recalled a design that Olds had designed and built with his previous company, the one bearing his name. The Model B came with a 16hp twin-cylinder engine. However, to compete in the low-priced automobile market Olds realized he needed to place a smaller, single-cylinder engine in the Model B. Olds would develop a single 8hp Model B. Chain driven, the engine would be mounted directly under the floor and would make use of a 2-speed planetary gearbox. The car would then feature a brass radiator placed at the front of the car with a conventional-style hood. The car's interior would feature two rear seats hinged to allow them to be folded forward so to enable the car to transform and offer some flat loading space. Complete with kerosene lamps mounted to the hood, the 8hp version Model B would end up being direct competition for his own previous design, the Oldsmobile Curved Dash.At the 2013 Bonhams auction held in Scottsdale, Arizona a 1907 REO Model B Runabout would be offered for sale. Complete with right-hand drive and the four foot pedals, the 1907 Model B would be presented mostly complete from the Miller Carriage Collection.As presented, the Model B still retains its brass-trimmed hood and blue body. However, it is prime for restoration. Still, even in its present condition, the Model B remains a precious and historic find.Estimates for this 1907 Model B prior to auction ranged from $30,000 to $40,000 and represented a great opportunity to own a truly historic and significant piece of automotive history. And, in many ways, the Model B helps to keep the true and authentic vision of Ransom Olds alive.
Sources:
'Lot 380: 1907 REO Model B Runabout', (http://www.bonhams.com/auctions/20582/lot/380/?list_search_query%3D1%26lang%3Den_us%26
back_to_year%3D2003%26sale_no%3D20582%26limit%3D9999%26query%3D
pierce%26create_facets%3DFalse). Bonhams 1793. http://www.bonhams.com/auctions/20582/lot/380/
?list_search_query%3D1%26lang%3Den_us%26back_to_year%3D2003
%26sale_no%3D20582%26limit%3D9999%26query
%3Dpierce%26create_facets%3DFalse. Retrieved 9 January 2013.
'1906 REO Model B News, Pictures and Information', (http://www.conceptcarz.com/vehicle/z12349/REO-Model-B.aspx). Conceptcarz.com: From Concept to Production. http://www.conceptcarz.com/vehicle/z12349/REO-Model-B.aspx. Retrieved 9 January 2013.By Jeremy McMullen

1907 REO Model B's that have appeared at auction but did not sell. 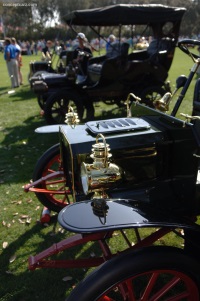