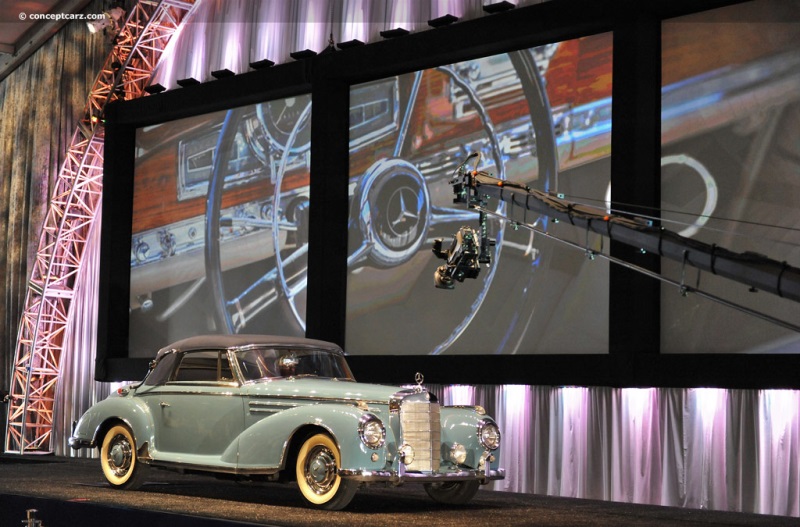 Cabriolet
Chassis #: 188.013.6500133
Sold for $825,000 at 2013 Gooding and Company - The Scottsdale Auction.
The 300-Series Mercedes-Benz was introduced as a four-door sedan and convertible sedan. The design and development would provide the basic mechanicals of the competition cars that would soon follow: the 300SL racers of 1952 and the SL road cars of 1955. The 300 sedan was soon augmented by the 300 S at the October 1951 Paris Salon with coup, roadster, and cabriolet coachwork. These limited production, luxurious cars were given a three-carburetor engine offering 150 horsepower. For the 300 SL project, engineers were required to utilize the 300 S engine and to extract more power from the straight six. Mechanical fuel injection was developed and after proven its potential, was retrofitted into the 300 S line to create 200 very special 300 Sc cars, which was introduced in 1955. The limited 300 Sc models were rated at 175 hp using the German DIN criteria. They rode on a 2900mm (114-inch) platform with four-wheel independent suspension. The bodies were created by the craftsmen at Mercedes-Benz' Sindelfingen coachworks in the old-world style. They had copious use of chrome, intricate wood interior trim, luxurious leather upholstery, hand-formed panels, and tight-fitting folding tops. Top speed was in the neighborhood of 112 mph. In total, just 49 Cabriolet examples were built.This 300 Sc Cabriolet was sold new to a physician in Laguna Beach, California. Little is known of its early history, though it is believed to have lived a very sheltered life. In 1986, a southern family purchased the Sc from the doctor's widow and has maintained it ever since. The car wears its original shade of Light Blue (DB 334) paint as well as the gray leather interior. It has a Becker Mexico radio and Hirschmann antenna. It has never been comprehensively restored and th odometer shows just 34,500 miles, which are believed to be original. Inside, there is a wood dash, and gray leather seats and door panels.
In 2013, the car was offered for sale at Gooding & Company's Scottsdale, Arizona sale. It was estimated to sell for $400,000 - $450,000. As bidding came to a close, the car had been sold for the sum of $825,000 inclusive of buyer's premium.
By Daniel Vaughan | Feb 2013