By the early fifties, Porsche found that modified production cars could no longer win races. The Gmund coupes had earned accolades for the Porsche marque, along with Franfort VW distributor and other friend of the house of Porsche. Walter Glockler had followed with his homemade specials, but now It was time for Porsche themselves to design a car specifically for racing.

The 1498cc flat-four, air-cooled, pushrod engine, mounted midship, was 'improved' for higher horsepower then fitted with twin-choke Solex 40 PII downdraft carburetors. An external oil cooler in the nose joined the wet-sump lubrication system. Weidenhausen of Frankfurt provided the alloy bodies for the two cars readied for the 1953 season. The first car (SN 550-01) completed was a roadster and finished 1st in its first race at Nurburgring.

At LeMans, Hans Hermann joined Helm Glockler (Walter's cousin) and two driver-journalists - Richard Von Frankenbert and Paul Frere and took 550-02. During practice both cars realized 124 mph on the Mulsanne straight. The two cars finished the race within a lap of each other after the entire 24 hours and crossed the finish line at the same interval at which they started. The 550-02 was awarded the win and both the 1500cc class and record. 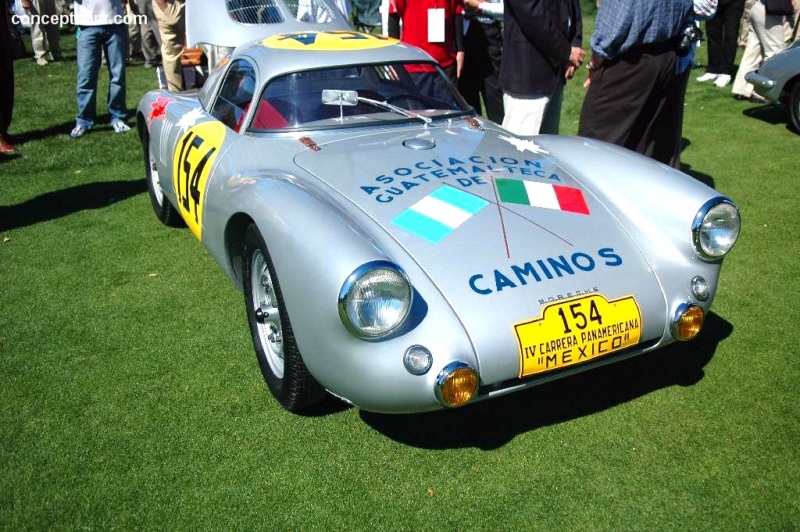 The cars raced at the Carrera Panamericana Road Race in Mexico where the 550-02 took first in class, then at the 1000-Kilometer Race in Buenos Aires where the 550-01 won, and both ran Sebring and other races. The 550 showed that these Porsches were serious about racing.Source - Historical notes courtesy of The Collier Collection
No auction information available for this vehicle at this time.