Sold for $122,000 at 2014 Bonhams - The Scottsdale Auction.
Sold for $88,000 at 2015 Bonhams Quail Lodge Auction.
During the early 1960s, auto manufacturers went head-to-head on the nation's drag strips, NASCAR ovals, and road-racing circuits. Companies like Ford, General Motors, and Chrysler Corporation stuffed the largest-possible engines into their full-sized two-door models to create true performance versions. To meet FIA and NASCAR displacement rules, these powerful motors were limited to seven liters, or just over 427 cubic-inches. Dodge and Plymouth created a 426-inch motor, Pontiac built their 421s, and 427s from Chevrolet and Ford.Along with large engines, the companies also reduced the sedan's weight, trying to reduce every possible pound. The 1963½ Ford Galaxie 500 Lightweight 'Sportsroof' hardtop was Ford's response, built on lighter frames intended for a 300-series sedan, and utilizing various heavy-duty brake and suspension components in addition to lightweight panels. The R-Code Galaxie Lightweight is thought to be the only full-sized Ford to obtain FIA Homologation. The lightweight galaxies competed in several disciplines, from NHRA drag racing and NASCAR competition, to road racing in touring car classes in the United Kingdom, Australian and South Africa. This example is one of only 212 built to drag racing specification at the direction of Ford's Merchandising Department. Power comes from a correct R-Code 427 cubic-inch NASCAR V8 engine with dual Holley four-barrel carburetors, solid lifters, and cast-iron headers developing 425 horsepower. There is a Borg-Warner aluminum-cased T-10 four-speed transmission, RC Industries NHRA-approved aluminum bell-housing, stiffer springs and shocks, Ford Police Interceptor rear axle with 4:11 gears, Interceptor heavy-duty drum brakes, steel 5.5 x 15-inch Kelsey-Hayes Interceptor wheels with 'dog-dish' hubcaps, a fiberglass hood, front fenders and inner fenders, aluminum bumpers and mounting brackets, and Bostrom 'Thin-line' lightweight bucket seats.
The normal carpeting has been replaced with simple rubber floormats. There are delete plates where the heater and radio once rested. The interior roof supports, dome lamp, and armrests were also deleted. There are no springs to support the hood. Even the back-up lights and rear-view mirrors were deleted in the interest of reducing weight.
It is believed the car was delivered to a Ford dealership in Hawaii where it would remain unsold. This was understandable as there were few racing opportunities for the car. Eventually, the Galaxie found a buyer, but the customer apparently didn't roll up many miles; the odometer reads a mere 6.9, although it is not known if this is an accurate figure. When it was discovered and purchased from the second owner in the early 2000s, both the engine and transmission were missing from the otherwise quite complete chassis. There is a correct R-Code 427 ci/425hp engine and T-10 transmission were acquired from a donor car, and along with the rear axle, were rebuilt by Garage Motorsports in Vancouver, Washington as part of a thorough, six-year, bare-frame restoration. The body was repainted in its original color of Corinthian White and retains its original factory-applied 'For Racing Use Only' disclaimer label inside the glove box.
By Daniel Vaughan | Nov 2013

1963 Ford Galaxie's that have appeared at auction but did not sell. 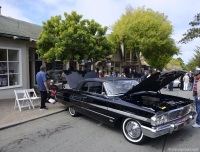