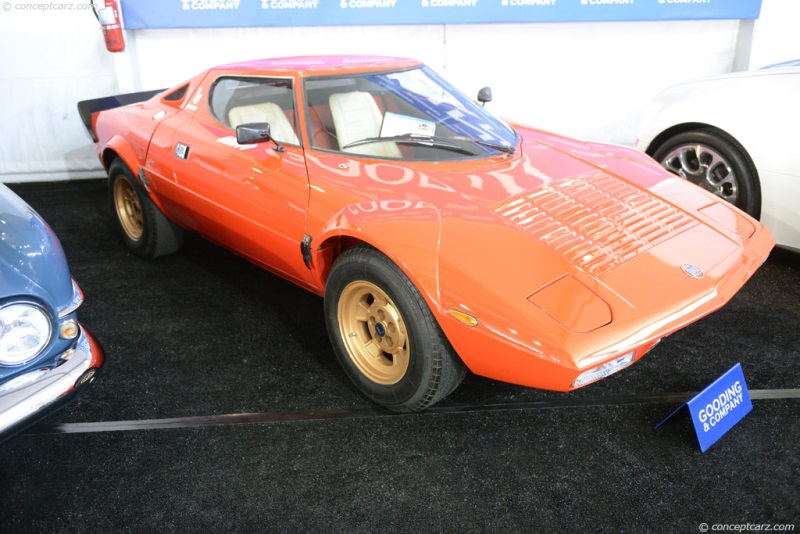 Coupe
Designer: Bertone
Chassis #: 829ARO001556
Engine #: 829A.000*001263
Sold for $429,000 at 2013 Gooding and Company - Pebble Beach.
The Stratos would make its debut at the 1970 Turin Motor Show as a concept and would capture the imagination of Ugo Gobbato and Cesare Florio. By 1972, the Stratos HF would make its debut at the Tour de Corse rally. The Stratos rally legend would be born.Between 1975 and 1980, the Stratos HF and Bertone chassis would absolutely dominate rally racing achieving 14 victories in World Championship events and a total of 80 victories in events all over the world. In total, just a total of 492 Stratos would ever be built, less than 300 would them would be the Stradale, the variant meant for customers. Chassis 829ARO001556 would be one of the very few Stradale variants and would be completed in May of 1974 wearing Stratos Red with gold wheels. When completed, the car would be delivered to Autorimessa Rizzi & C. S.r.l. in Como, Italy. In spite of being created specifically for customers, the chassis wouldn't be sold until March of 1976 when Karl Kobler of Switzerland took delivery of the car. Mr. Kobler, a Swiss postman, had a passion for motor racing and thoroughly enjoyed the Stratos.
Kobler would become a member of the Stratos Club and would take part in a number of events throughout Switzerland. Never afraid to drive the car, Kobler would be a regular at Swiss Stratos meetings. However, he always looked after and cared deeply for his Lancia.
Nearly a decade after purchasing the Stratos, Kobler would be retired from the post office and would have much more time to devote to his Italian love. Another 20 years the car would remain with Kobler. He would enjoy every opportunity he would have to drive the car. Then, in 2005, declining health would prohibit him from driver the car ever again. The car would sit, unused, until after Kobler's death in 2011. Even going to his grave the Stratos would be right there with him as a small model of the car would be placed in the casket to be buried with him.Kobler's Stratos would be put up for sale and would immediately be a popular option given its highly-original state. Sold, the Lancia would then make its way across the Atlantic to the United States and its new owner.Upon arriving in the United States the Stratos would almost immediately be treated to a mechanical renewal. Costing $15,000, the Stratos would be brought up to good working order and would still carry its red finish with gold wheels.Highly original after nearly 40 years and 36,500 miles, the Stratos still has its original carpets, wooden shift knob, Britax seat belts, Stratos Red paint and body panels. The seats would be reupholstered in white vinyl but would still boast of its original Lancia warranty book and owner's card. An interesting feature to this particular Stratos is the fact the car also comes with a tool kit that Mr. Kobler added to.Owned for nearly 35 years and owned by just two individuals, the highly original Stratos would be offered at the 2013 Gooding & Company Pebble Beach auction complete with a great amount of original documents, correspondences, grille badges and numerous other intriguing insights into its history.

1974 Lancia Stratos's that have appeared at auction but did not sell.