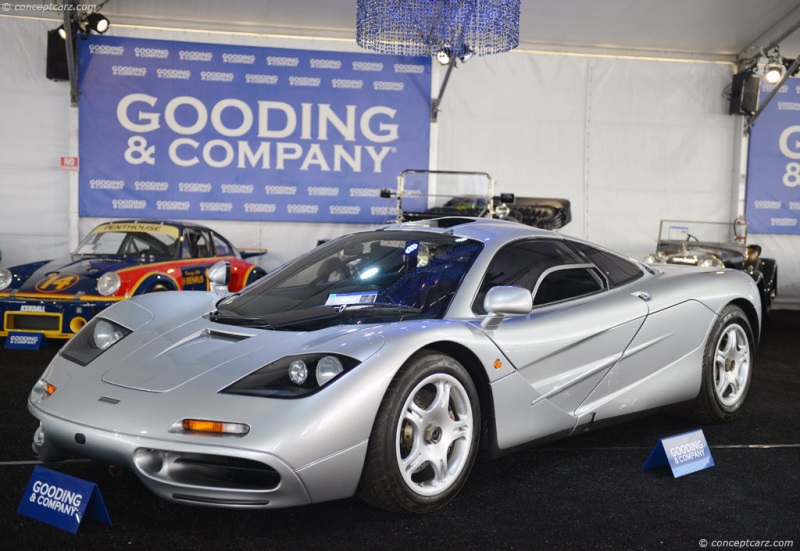 Coupe
Chassis #: 066
Vin #: SA9AB5AC9V1048066
Sold for $8,470,000 at 2013 Gooding and Company - Pebble Beach.
The McLaren F1 epitomized the Formula 1 operation. The design was courtesy of Gordon Murray and the F1 was engineered with precision, utilizing the finest materials available including aluminum, titanium, carbon fiber, and even gold. The engine, spearheaded by BMW Motorsport's Paul Rosche, was tailor-made to suit the needs of the F1 development team.The powerplant, not only propelling the road-going F1, helped McLaren win the 24 Hours of LeMans and served in BMW's own successful racing efforts. The F1 debuted in 1992 and during its existence has been bestowed with every automotive cliche, every possible hyperbole, and has been featured in many books, films, and television series. Time has proven that the F1 has far exceeded the expectations of both its designers and critics in many ways.
Chassis number 066
This car is the 54th road car built and was finished in Magnesium Silver. It was sold new to German enthusiast Thomas Groth in 1997. By 1998, the McLaren had accumulated approximately 7,500 km. After 12 years of singular ownership, the F1 returned to McLaren. Around that time, an American collector was visiting the factory to take delivery of his first F1. The collector was made award of another F1 (066) being prepared for sale by the original owner. By the end of the day, he became the owner of two McLaren F1s.
Before the car was brought stateside, the current owner appointed the factory to install a quick-release steering wheel and change the odometer from kilometers to miles. A completely new leather and Alcantara interior was also installed. Once complete, 055 was imported to the US in December of 2009, and entrusted to Wallace Environmental Testing Labs in Houston, Texas, for federalization. The car is complete. It has the original owner's manual in its leather-bound case, the service and warranty book, the spare key, the factory luggage, the vanity mirror, the garment bag, gold-plated titanium tool kit and roll, Facom F1 rolling tool box complete with keys, numbered passenger wool floor mats, 10-disc Kenwood stereo, two Guardian battery chargers, an electric torque wrench, and a cotton, McLaren F1-embroidered car cover. There is also a roadside kit with gloves, a fire extinguisher, a lightweight wheel lug wrench, a fuse and bulb kit, a spare set of headlights, the factory-designed and installed valentine radar detector, radar instruction book, the original Nardi-McLaren leather steering wheel, and leather-bound volume Driving Ambitions. Currently, the car shows roughly 13,900 miles.
By Daniel Vaughan | Dec 2013

1997 McLaren F1's that have appeared at auction but did not sell.