Sold for $1,622,500 at 2015 RM Auctions - Automobiles of Arizona.
The Corse Clienti department was formed in 2001 and since that time it has managed the Ferrari challenge Trofeo Pirelli, the Shell Ferrari Historic Challenge, and F1 Clienti. This group of racing series has encouraged enthusiastic Ferrari owners to race their cars on some of the world's finest courses, with the full support of the factory.The Ferrari Enzo was introduced in 2002, and immediately Ferrari realized the potential opportunity for the Corse Clienti department. The FXX Programme was envisioned as an all-new series with an unusual concept. Ferrari described it as the 'ultimate level of motoring that does not involve racing.' The Programme was designed as a collaboration between the factory and a select group of 'owner test drivers.' It allowed a handful of important Ferrari clients to contribute to the development of future models and explore the limits of customization.The FXX was developed as a highly tuned, track-only derivation of the road-going Enzo. The engine was enlarged to 6.3-liters and was given advanced technology, including a telemetry system that monitors and provides feedback on 39 different vehicle dynamic parameters.
Fifteen specialized technicians from Maranello supervised the running of the cars and worked in tandem with the test drivers, making adjustments and extracting the highest levels of performance. Only Ferrari's most valued customers, factory drivers, and professional drivers were given an opportunity to partake in the program.
Each outing began with an installation lap, followed by two timed laps. The data was then compiled, the FXX owners took to the track again and were encouraged to explore the limits of the car and their driving abilities. Chassis number ZFFHX62X000145369
This example is the first of the 30 cars constructed for use in the FXX Corse Clienti Programme. The car has participated in three FXX Corse Clienti events, each of them in the United States. It participated in the FXX event at Homestead-Miami Speedway in April of 2006, and again in March 2007. In early 2008, it returned to the factory for the FXX Evoluzione upgrade. It was given its metallic white livery which it still retains today. The Evoluzione package enables the engine management system to optimize power output, raising peak horsepower another 9-percent to 860 BHP. The transmission was given revised ratios to better respond to the increased power, and shifting duration was reduced to just 60 milliseconds. It also received a new traction-control system that offers nine different increments of assistance, plus the option to turn it completely off. Changes to the vehicle's aerodynamics include a redesigned rear diffuser and optimized front and rear spoilers. New suspension geometry was added, which improves handling and reduces tire wear. Cars that were given the Evoluzione package also were given black wheels, so the upgraded cars can be easily differentiated on the racetrack.After the upgrade, the car participated in one additional Programme event at Laguna Seca in August of 2010. The car has participated in a total of just six heats over its three Corse Clienti events. It is estimated that it has logged just three to four hours of track time since new.
By Daniel Vaughan | Dec 2013

Recent Sales of the Ferrari FXX

Ferrari FXXs That Failed To Sell At Auction

2005 Ferrari FXX's that have appeared at auction but did not sell. 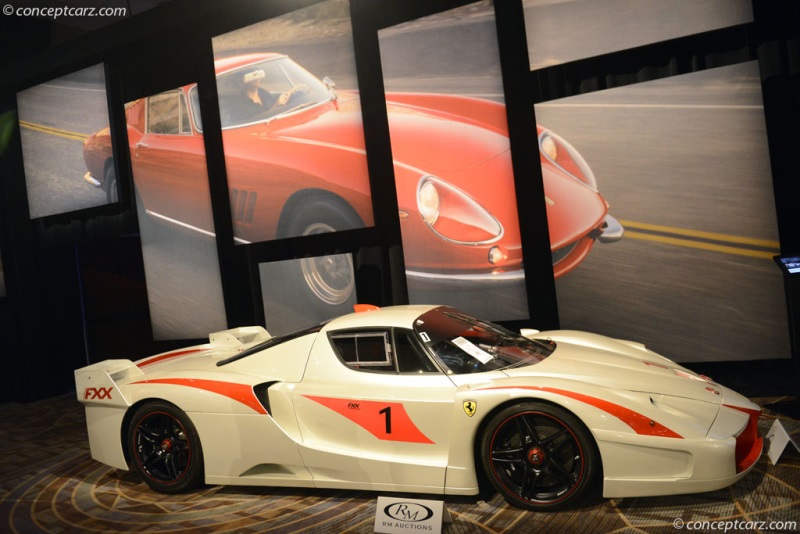