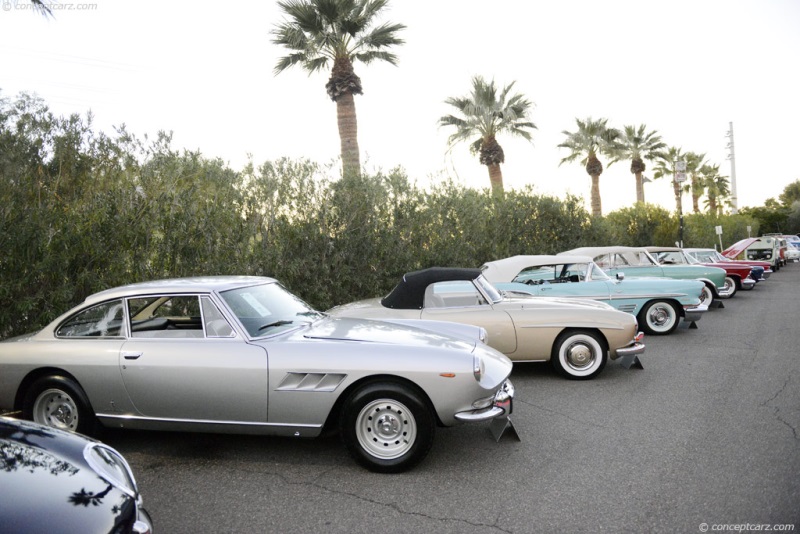 Coupe
Designer: Pininfarina
Chassis #: 8251
Engine #: 8251
Sold for $308,000 at 2014 RM Auctions - Automobiles of Arizona.
Ferrari's primary efforts were centered around racing but it was the sale of their road going models that provided the financial backing to sustain their habits. The first 330 was the 330 America, which had the new Tipo 209 V12 engine which displaced 3967cc (330 cubic centimeters per cylinder, giving the car its name). The engine had a slightly longer block than its 400 SA series predecessor and was rated at 300 horsepower. The 12-cylinders were given a trio of Weber 40 DCZ/6 carburetors and mated to a four-speed gearbox with an overdrive unit.The 330 America was followed by the 330 GT 2+2 which was introduced in January of 1964 at the Brussels Motor Show. Styling was courtesy of Pininfarina's American designer Tom Tjaarda who gave the vehicle a quad headlamp arrangement. This controversial deign were subsequently replaced with a more conventional twin headlamp arrangement a year later, with the Series II.
The 330 GT 2+2 had a wheelbase that was two-inches longer than the 250 GTE, and came equipped with advanced engineering features such as Koni adjustable shock absorbers and a Dunlop dual-circuit braking system that gave both the front disc and rear disc brakes their own servo-assist. In 1965, a five-speed gearbox became available, replacing the overdrive unit. Approximately 125 'interim' examples exist with quad headlamps and the additional gear.
455 examples of the Series 330 GT were produced before the 365 GT arrived in 1967.This vehicle has had just three owners during its 50 year history. It was delivered new to its first owner in Cremona, Italy. The car has the Series II single headlamp setup and the original Series I dashboard. In February 1966, it was completed by Pininfarina in Turin, Italy, wearing Argento metallic over Nero leather with red carpeting. It was given cast alloy wheels, power windows, and a Blauunkt audio system.The 330 GT 2+2 did not remain in Italy long, and within five-years, it was purchased by Raymond S. Boniface, of Poland, Ohio. Boniface's ownership lasted just five years. In 1974, it was acquired with 68,252 kilometers on its odometer, by Jim Gerken, from Deetz Mercedes-Benz in Elyria, Ohio. Mr. Gerken was a long-term caretaker of the car, selling it only recently.Currently, the car shows about 85,000 original kilometers (approximately 52,000 miles). In the early 2000s, the car was given an extensive powertrain overhaul at a cost exceeding $120,000. The car has its original factory-applied Argento paint, Nero leather, and red carpeting.
By Daniel Vaughan | Feb 2014