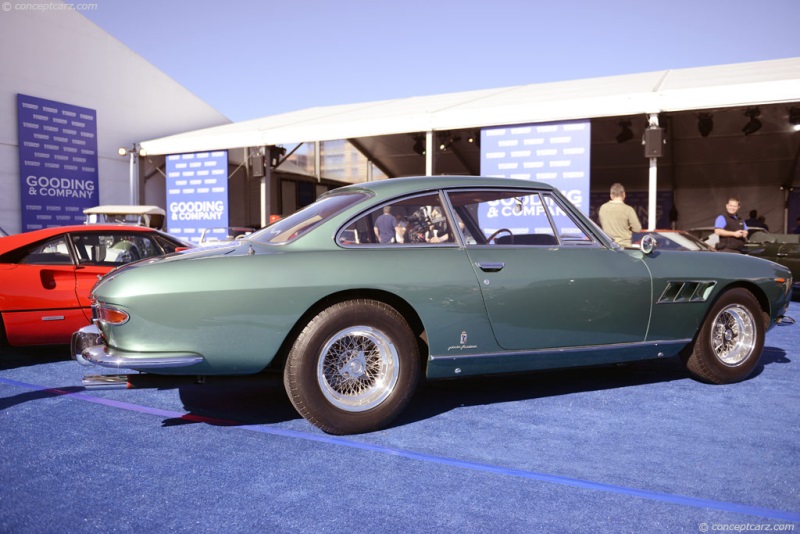 Coupe
Designer: Pininfarina
Chassis #: 08551
Engine #: 08551
Sold for $297,000 at 2014 Gooding & Company - The Scottsdale Auction.
Ferrari produced 460 examples of the Series II. This is one of the 424 left-hand-drive cars built. It left the factory finished in Verde Pino Metallizatto with Rosso Connolly leather upholstery. The car was given a five-speed gearbox, standard power-window lifts, and options including power steering and Borrani wire-spoke wheels. The car was completed during May of 1966 and delivered new to Dusseldorf and official German Ferrari importer Auto-Becker, who sold the car new to its first owner, a successful puppet manufacturer. Other original features included an ignition switch marked in German, plus Metric instruments.In September of 1970, with just 17,000 km travelled from new, the car returned to Auto-Becker who re-sold it in January of 1971 to its second owner, Ted R. Peterson of Glen Arbor, Michigan. Shortly after arriving in the United States, the car was repainted brown in February of 1971. Mr. Peterson showed the car at the 12th Annual FCA National Meeting and Concours in May 1975. He kept the car until 1987, when he sold the 330 to Scott McCuskey of Madison, Indiana. During the mid-1990s, Mr. McCuskey commissioned a sympathetic show-quality restoration, including a bare-metal refinish in the car's original-specification color. Since the restoration work was completed, the car has been displayed at various events and venues through 2005. It was shown at the 1998 Ault Park Concours d'Elegance, where Ferrari was celebrated as the featured marque. At the 34th Annual Ferrari Club of America National Meeting and Concours held at Leesburg, Virginia, the car earned a Gold Award and Most Authentic Interior.
The car has a Becker Grand Prix AM/FM radio unit, books, owner's manual and parts catalogue, plus a proper tool roll. The car rides on Borrani 3812 wire-spoke wheels fitted with correct, Pirelli Cinturato tires. Current, the odometer shows less than 82,400 km.
By Daniel Vaughan | Feb 2014