Sold for $35,200 at 2014 Gooding & Company - Amelia Island Sale.
The BMW 700 Series helped satisfy a growing number of German buyer's demands during the early 1960s for improved performance, passenger space, and content. From early 1962, the 700 Sedan (also known as the Limousine), was given a wheelbase extension and a lengthened rear-body section giving rear passengers even greater comfort. By February of 1963, the two-cylinder engine powering the 700 was given a slight boost in power. Sales were strong when BMW made the decision to phase out the 700 to allow more factory capacity to the 'Neue Klasse' 1500 series. Production of the 700 and 700 Coupe ended in May of 1964, succeeded by one final model.BMW chose the Frankfurt Motor show in September of 1964 to introduce their 700 LS Coupe. It had the basic two-door coupe body with the longer wheelbase LS Limousine chassis and a body shell that was lengthened to fit the chassis. The rear section was grafted in by the Baur coach-building company, and flatter rear-window glass was fitted. Powering these new cars was a 40 horsepower, twin-carbureted 'boxer' engine.
Production continued through November of 1965 after 1,740 of these final 700-series models were built.
This particular example is from the final year for the BMW 700. This model, sometimes referred to as a 'Long-Tail Sport Coupe', is one of the 1,730 examples produced. The car has carpeted floors, a laminated wood-grain dash treatment, and improved seating. Power is from the correct 697cc, 40 horsepower engine with twin Solex Downdraft carburetors. There is a four-speed synchromesh manual gearbox and four-wheel hydraulic drum brakes.This car has been treated to a restoration. It was imported to the United States from Germany in early 2010. It is finished in light green exterior paintwork over light upholstery. It has the correct spare tire, original glass, tools, a jack with crank, and a period Blaupunkt radio.
By Daniel Vaughan | Apr 2014

Recent Sales of the BMW 700

BMW 700s That Failed To Sell At Auction 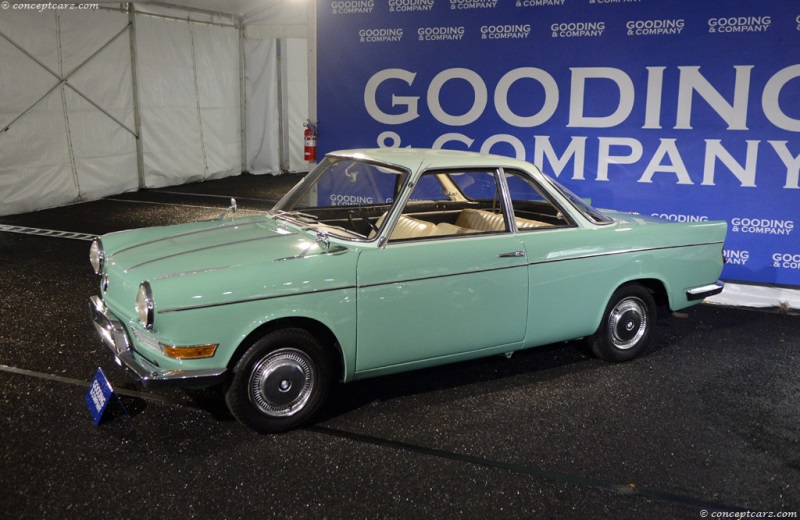