Sold for $280,000 at 2018 RM Sothebys : Monterey.
Vintage car racer/restorer Philippe de Lespinay did not set out to restore the Kimberly Cooper that Jack Brabham drove to 9th place at the Indianapolis 500 in 1960 - far from it. He was in the midst of restoring a pair of Brabham BT8s and needed some parts for a 2.5-liter Climax engine. What he got was the remains of a rare 2.75-liter Climax engine. This changed everything.Sir Jack Brabham won two World Championships in 1959 and 1960 at the wheel of the little rear-engined 2.5-liter Cooper Formula 1 cars, but Brabham had the biggest influence on the racing community in the United States when he entered this Kimberly Cooper Special in the 1961 Indianapolis 500. After testing a Cooper at Indy in 1960, Brabham finished ninth in the 1961 race. It was the first time that rear-engined car had ever raced in the Indy 500, and it started the move to rear-engined designs that eventually lead to the end of the front-engined race cars. The mid-engined car design concept had been tried several times between 1937 and 1951 but only five examples ever qualified and none of them traveled beyond 47 laps.The Cooper Car Company was founded in 1947 by Charles Cooper and his son John Cooper. In 1947 they began building race cars in Charles' small garage in Surbiton, Surrey, England. In the late 1950s and early 1960s, they reached auto racing's highest levels as their rear-engine, single-seat cars altered the face of Formula One and the Indianapolis 500, and their sedans dominated rally racing. Brabham took the Championship-winning Cooper to Indianapolis Motor Speedway for a test in 1960, and then entered the famous 500-mile race in a modified version of the Formula One car in 1961.
After a test run at IMS in October 1960, arranged by Rodger Ward, Brabham and team principle John Cooper went about preparing an entry for 1961, boring out a 2.5-liter Coventry Climax engine to 2.7 liters and laying it slightly over to the left. Brabham enjoyed superior handling through the turns and he might well have finished higher had his pit crew been more familiar with making fuel and tire stops, a rarity in Grand Prix racing at the time.
The 'funny' little car from Europe was mocked by the other teams, but it ran as high as third and finished ninth. It took a few years, but the Indianapolis establishment gradually realized the writing was on the wall and the days of their front-engine roadster were numbered. The rear-engine concept would gradually change forever the face of not just Grand Prix racing, but cars that would compete in just about every category around the world.

Sold for $280,000 at 2018 RM Sothebys : Monterey.
When this Cooper-Climax T54 arrived at the Brickyard in May of 1961, it introduced a change to the conventional front engine design that had persisted since the first Indianapolis race in 1911. It was designed and built in just four months. It was derived from the T53 and live a longer wheelbase and an offset chassis that were better suited to the large oval track at Indy. Power was from a 2.7 liter experimental Climax engine, which is believed to have been numbered ET-892-1204. Its 253 horsepower was much less than the front-engine cars using the 4.4-liter Offenhauser engine offering 430 horsepower. It may its appearance at the Brickyard on May 5th of 1961. Driving duties were entrusted to now two-time Formula 1 World Champion Jack Brabham. It qualified 13th at a speed that was only 2.3 mph slower than the previous year's pole time set by Eddie Sachs. The more powerful American cars were much faster on the straightaways, but Brabham's Cooper-Climax delivered superior handling through the turns. He ran as high as 3rd place during the race before finishing all 200 laps in 9th place. The car did not win the race but it started the 'Rear Engine Revolution' and within five years most cars raced at Indy would have rear-mounted engines. By 1969 all Indy 500 qualifies had adopted the change. In 1961, the two 'Indy' Coventry-Climax engines from the T54 were installed in two Cooper sports racers for U.S. racing. The first engine was installed in a Cooper 'Monaco' owned by Hap Sharp, to be driven by Brabham. The other engine was placed into the Works Monaco to be driven by Bruce McLaren at the 1961 Times Grand Prix at Riverside. Brabham won by one second over McLaren.
The Cooper team sold engine number ET-892-1204 to Roger Penske who used it in a custom-built car called the 'Zerex Duralite Special' in 1962. The racing career of the engine continued until a race in Pensacola, Florida, when Hap Sharp driving for Roger Penske, missed a shift, and damaged the engine.
The Copper-Climax T54 was sold by Jim Kimberly in 1962 to Kjell Qvale. Qvale had an Aston Martin six-cylinder Works engine installed by his mechanic, Joe Huffaker. Pedro Rodriguez was tasked with the driving duties for the 1963 1963 Indianapolis 500. Unfortunately, the car did not qualify for the race after it was bumped from the 33rd spot on the final day of qualifying. After disappearing for over a decade, it re-appeared as a Chevrolet-powered sprint car and raced in the Pacific Northwest through 1977. In 1990, many of the surviving original parts, including the 'Indy' engine, were located and repaired. Over the next two years, the car was brought back to its original 1961 'Kimberly Cooper Special' configuration.
By Daniel Vaughan | Jan 2019

Cooper Kimberly T54s That Failed To Sell At Auction

1961 Cooper Kimberly T54's that have appeared at auction but did not sell. 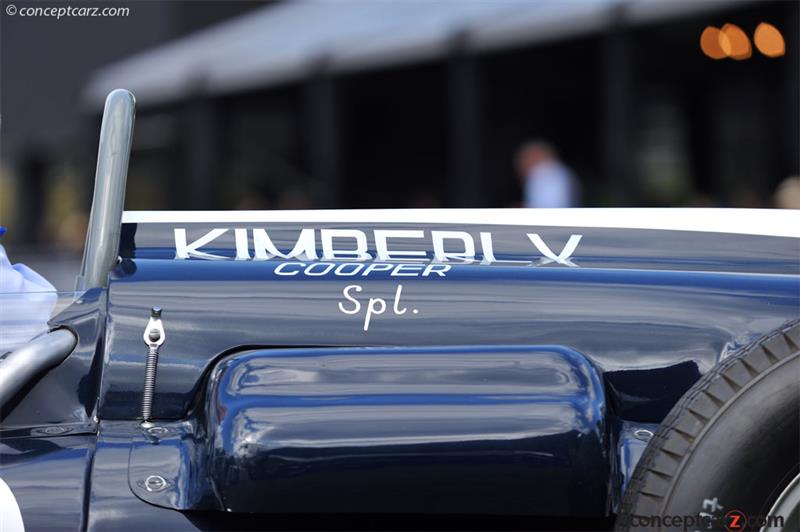