Sold for $143,000 at 2014 Motor City Auction by RM Auctions.
In keeping true to the Packard legacy, the Packard Twelve Prototype of the late 1990s was designed and built as a unique, ultra-luxury, high-performance full-size American vehicle with moderately progressive, distinctive styling incorporating traditional Packard design elements. During the Packard marque's existence, they created some of the most elegant and stylish vehicles. They were premium priced and built to high standards; the name 'Packard' represented quality, style, and luxury.This new Packard Prototype continued the legacy of the Packard marque, with state-of-the-art engineering, superb performance, quality, and styling design cues of the traditional Packard. The idea began during a conversation among friends at lunch in 1991. After successfully securing the trademark rights to build a new automobile with the Packard name, concept development began during September and October of 1993. Styling and Engineering work began in January of 1994 and continued for two years with Gullickson and Lawrence Johnson, who were both mechanical engineers with automotive experience. Upon completion, the Packard Twelve Prototype and the new Packard Motor Car Company were introduced publically at the 25th-anniversary celebration of Arizona Packards in Tucson in October of 1998.The styling for the Packard Twelve Prototype was developed after consultation with four professional stylists, who included Don Johnson, the former GM stylist who was responsible for the final version of the Zimmer automobile. The sub-structure is an all-aluminum space-frame chassis and body, extensively using proprietary high-strength, heat-treated aluminum extrusions. The special aluminum suspension A-frames and knuckles are heat-treated, then X-rayed and dye-penetrant tested to detect any porosity. Anti-squat and anti-dive geometry are included, along with 13.2-inch four-wheel disc brakes. The completed car weighs in at a comparatively light 3,750 pounds.
Under the bonnet is an all-aluminum, overhead-valve V12 engine displacing 525 cubic inches and offering 573 horsepower. There is a Delco electronic-port fuel injection system, dual catalytic converters and oxygen sensors, and Delco powertrain control modules. Full-time all-wheel drive is managed by a Borg Warner transfer case with a viscous clutch and a 35/65 torque split front/rear. A GM 4L80E four-speed electronic-shift automatic transmission was chosen for effortless touring. Zero-to-sixty takes just 4.8 seconds with the quarter-mile taking just 12.5 seconds.
The exterior design and mechanical capabilities are complimented on the interior, with luxurious leather upholstery, hand-finished dark walnut veneers with aluminum backing, power front seats, and power windows and locks. There is an automatic temperature control, full instrumentation, and an AM-FM radio with a CD player and changer.From design to completion, the project cost an estimated $1.5 million. For now, the Packard Twelve Concept is a study of an American-designed and built ultra-luxury performance automobile.
By Daniel Vaughan | Sep 2014

Packard Twelve Prototypes That Failed To Sell At Auction

1999 Packard Twelve Prototype's that have appeared at auction but did not sell. 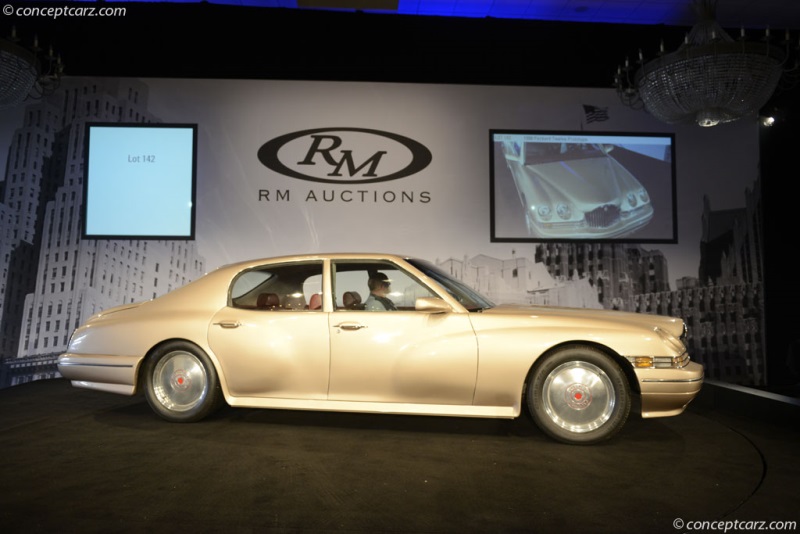